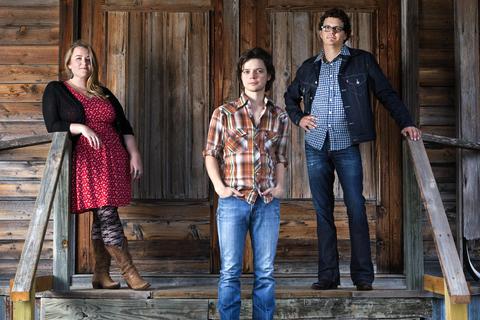 Listen to Where Have You Gone

Four decades in 44 minutes, quite a feat. Sons should better their fathers, yet Warren Hood's done the late Champ Hood even grander by not only taking up the standard, but advancing it in a way that ties together more than 40 years of Austin's root sound. Early Seventies trio Uncle Walt's Band, with the also tragically taken Walter Hyatt and now sole survivor David Ball, put a Hill Country spin on the burgeoning, suede-smooth Americana easing out of folk, rock, and singer-songwriter histrionics. Stitch in bluegrass, jug band, and hillbilly music, and take it down into a moonshine sway. The Warren Hood Band lilts as sure and pure as Lyndon Johnson attending the first Kerrville Folk Festival, while at the same time bottling the youthful Southwestern tincture laying out another generation of Austinites today and one prays forever after. Closer "What Everybody Wants" ambles at a decidedly South Austin pace, in part courtesy of producer Charlie Sexton and collaborators including Lloyd Maines (pedal steel), J.J. Johnson (drums), and Emily Gimble of the fiddling Gimbles (piano and vocals), but by that late point, you've already been swinging in a hammock since the first track. The immediate hook of opener "Alright," with its ascending chorus, singles out the younger Hood's compositional gift, and comes right back with the blithe to-and-fro of his co-write with another native Austin spark, Suzanna Choffel, on "You've Got It Easy." Hood's light tenor suggests the weightless delivery associated with ancient jazz long before Gimble takes the lead on "Pear Blossom Highway," which evokes Continental Club queen Toni Price – and not by accident. Composed with the Hippie Hour diva's prime collaborator, Gwil Owen, Hood's swaying country soul just as easily cites Norah Jones, especially followed up with the second of three Gimble leads, "Where Have You Gone," an even better R&B approximation of Price. Gimble's hat trick, "Take Me by the Hand," once again joins together Hood and band guitarist Willie Pipkin, and from their songwriting tandem here, it's Uncle Walt's Band all over again. Gentle train rhythms in "Songbird," Hood's fiddle and mandolin twining together, and back-to-back covers of Walter Hyatt and Champ Hood encore the Grateful Dead-like opening to "Take Me by the Hand." Timeless.