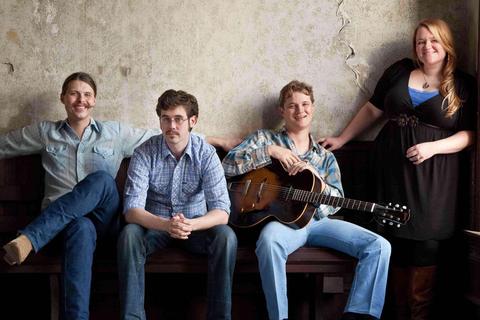 The living room clock of Marshall Ford Swing Band songwriter-guitarist Greg Harkins has the 3 and 9 switched. The clock runs counter-clockwise, but Harkins sees no problem with it. In fact, the clock’s irregularity perfectly fits into the makeup of the Austin swing band’s aesthetic.

“We’re heading into the past, man,” Harkins says with a smirk.

Harkins and his band mates have been evoking that past since 2008. They pride themselves on playing Western swing music the way the legendary Johnny Gimble — MFSB singer-pianist Emily Gimble’s grandfather — plays, the way Bob Wills and Hank Thompson used to when they ruled the Texas scene. They’re unique in their modern execution of the antiquated art.

“It’s fun to play,” Harkins says of Texas swing music. “It’s got hip changes. You can’t help but tap your feet and snap your fingers to it.”

Named for the predecessor of Lake Travis’ Mansfield Dam, the band’s roots were planted in 2003 by Harkins. Raised on Willie Nelson’s “Somewhere Over the Rainbow” and Bob Wills’ “For the Last Time,” the band’s interest in swing music took them to Johnny Gimble’s swing camp in Taos, N.M., where they met Emily and knew they had to start playing with her regularly.

“Emily Gimble ... sings with an amazing, free, effortless style. She sounds a little bit like Norah Jones and Billie Holliday, but it’s not as mannered or stuffy as other female singers ... What I like about Emily is that she is totally unaffected, and the music just pours out of her, like it floats up out of her body, like an essential part of her.”
- Elana James, Hot Club of Cowtown
They persuaded Emily to move from Waco to Austin and brought in bassist Kristopher Wade and drummer James Gwyn to complete the quartet. Since then, it’s been delighting fans with its upbeat swing and guitar magic in Austin and beyond. The band often plays with different pairings depending on the gig.

Fans of the Marshall Ford Swing Band will get a heavy dose of Emily’s sultry vocals, Greg’s playful guitar phrasings, and Kris and James’ tight rhythm section on this year’s IT’S ABOUT DAM TIME, the band’s first full-length studio album. Recorded at Austin’s famed Tequila Mockingbird Studios and produced by Danny Levin, the album showcases the band’s healthy dose of original tracks — each member contributed at least one song — along with some of Western swing’s most beloved standards.

Altogether, the album proves to be a welcome introduction to members of Marshall Ford Swing Band, modern day carriers of western swing’s torch.

“A lot of people I know will play swing music,” says Emily, “but it’s not the same as with these guys. We pull off Western swing very well. It’s special.”

”The Marshall Ford Swing Band harnesses the energy of the group’s live shows on its debut release, IT’S ABOUT DAM TIME. From toe-tapping Western swing to bebop jazz, the album shows the band’s ability to play several styles of music and play them well. Check out the sultry vocals of pianist-singer Emily Ann Gimble — granddaughter of legendary fiddler Johnny Gimble — on “You’re Why” and the frantic guitar work on the instrumental “Section 8.” This is the rare album that doesn’t have a track you skip every time you listen.” - Austin Monthly
“There’s something about hearing musicians in their 20s perform swing tunes more than twice their age and really nailing it. The affection the Marshall Ford Swing Band has for the music comes through both in its originals and the covers, which makes listening to [IT’S ABOUT DAM TIME] a joy.” - The Austin Chronicle
“... the moving between an old jazz feel and a traditional country feel gives [the band] an album that is full of unique twists and turns. Balancing the vocal leads between male and female captures your attention throughout the album ... but the incredible musicianship [band members] possess is the truly impressive part of this album. ...” - Today’s Country magazine
“This group’s tunes are reminiscent of the early days of swing music, where the bass kept the beat and the mandolin was a prominent fixture.” Austin American-Statesman
“Everyone loves MFSB. They are the perfect Austin, Texas, musical experience. They are sophisticated and professional musically; they represent regional genres with style and excellence; and they are so darn much fun.” - Rose Reyes, Austin Convention & Visitors Bureau