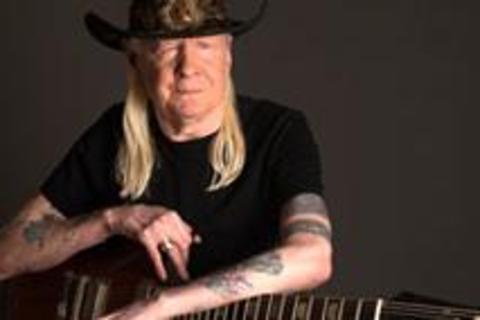 Johnny Winter
Voted one of the top 100 guitarists of all time in Rolling Stone Magazine Johnny Winter is a guitar hero without equal. Signing with Columbia Records in 1969, he immediately laid out the blueprint for his fresh take on classic blues with a powerful combination of authentic Texas funk and his own high energy interpretation for the legions of fans just discovering the blues via the likes of Jimmy Page and Eric Clapton. Constantly shifting between primal country blues in the vein of Robert Johnson to scorching electric slide guitar, Johnny has always been one of the most respected singers and influential guitar players in rock and the clear link between British blues rock and American Southern rock ala the Allman Brothers and Lynyrd Skynyrd. Throughout the 70s and 80s he was the unofficial torch bearer for the blues, championing and aiding the careers of his idols like Muddy Waters and John Lee Hooker. The Johnny Winter story is the stuff of legend. Born in Beaumont, Texas, in a rough and tumble oil town he grew up listening to and then playing Blues and Rock 'n' Roll at a very early age. His inclusion in a story about Texas music in Rolling Stone in 1968 ignited a bidding war among record labels for his phenomenal talent. Since 1969 and his self-titled debut, Johnny has recorded almost 40 albums of classic rock and blues and was one of the top arena rock acts in the mid-70s. In the late 70s he produced and played on a stunning series of Grammy award winning albums with Muddy Waters, who affectionately referred to Johnny as his "son." The recordings served as a "comeback" for his idol while also refreshing his own deep and unwavering love of the blues.

Today Johnny Winter is enjoying an unparalleled resurgence performing to sold out shows worldwide even after a long life full of honors and accomplishments such as a triumphant appearance at Eric Clapton's Crossroads Festival with Derek Trucks, Buddy Guy and Clapton that has been immortalized on the Emmy award winning DVD. In a ceremony with Slash presenting in Nashville, Gibson Guitars released the signature Johnny Winter Firebird guitar that has been his beloved trademark for years. His Live through the 70s, 80's, Rockpalast and Live in Japan concert DVDs are a hit as are his Live Bootleg Series CDs which all entered the Top 10 on the Billboard Blues charts. Two unique instructional DVDs and I-Pad App. have been produced by Cherry Lane/Hal Leonard to the gratitude of players around the world.

Always one for special appearances he recently performed with the Allman Brothers at the Beacon Theater in Manhattan on the 40th anniversary of their debut. In addition Winter has been headlining such prestigious events as the New Orleans Jazz & Heritage Festival, Chicago Blues Festival, Swedish Rock Fest, Warren Haynes X-mas jam and Europe's Rockpalast viewed by millions just to name a few. Warner Bros. has now released a 40th anniversary DVD of Woodstock: 3 Days of Love and Peace the Director's cut featuring, for the first time, Johnny playing his smoking classic "Meantown Blues." His latest highly acclaimed release “Roots” (Megaforce/Sony) and recent performance on The David Letterman Show has only added to his Texas-sized reputation. Joining him on this CD is his scorching road-tested touring band consisting of guitarist Paul Nelson, bassist Scott Spray, and drummer Tommy Curiale. Performing now with a renewed vigor and fire to say that he is "back" would be an understatement. In fact, he never left. He is just better than ever.