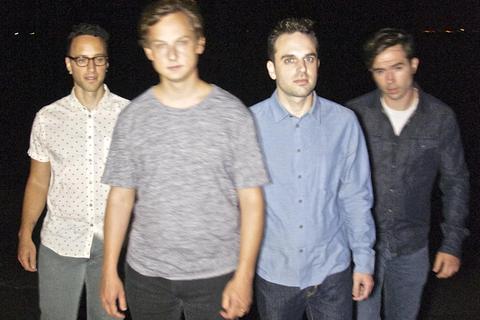 Formed in Washington D.C. in 2005, the band has released an EP—Deleted Scenes s/t (2007)—and two full-length albums—Birdseed Shirt (2009) and Young People’s Church of the Air (2011)—while touring extensively throughout the U.S. and Canada.
Deleted Scenes’ third LP, Lithium Burn, was recorded in March and April 2013 with production duo Brian McTear and Jonathan Low (Kurt Vile, Local Natives, The National, Sharon Van Etten, The War on Drugs) at Miner Street Recordings in Philadelphia.
There has always been an element of darkness in Deleted Scenes’ songwriting, but Lithium Burn is more direct about it. The record is named for the metallic acid reflux Scheuerman experienced when taking lithium as a mood-stabilizer. Its songs address the distance between people—friends, lovers, parents and children, persons and their ideal selves. It's a treatment of sadness on an individual scale—ultra-specific details give way to universal observations; tiny moments swell into song-length ruminations. In “Seasons of the Wire,” Scheuerman documents the rise and fall of a relationship through minute details, each line beginning with the phrase “blame it on the….” In “House of Dust” and “Landfall,” silence rages and threatens to explode.
On their previous two records, Deleted Scenes used studio experimentalism to modify its sound. Vocals were re-recorded through guitar amps and tape decks. Drum beats were cut up and pummeled into different shapes. Lithium Burn captures the band in its natural state. “We wanted to take an emotional risk with this album, and sound fully like ourselves—with no disconnect between what we sound like live and what our album sounds like,” Scheuerman said. “The emotions on the album are completely raw and open, and it didn’t seem right to obscure the lyrics or present the music in a self-conscious way.”

The songwriting process of Lithium Burn originated with the near meltdown of the band on a 2012 tour. After losing a drummer and almost breaking up over breakfast at Denny’s, the band retreated to a rented house in East Nashville to spend fall 2012 reinventing itself. “I was tired of telling people what to play, and they were tired of me telling them what to play. We decided that the only way we were going to make another album is if we all had 100% creative involvement.” The gamble paid off, with Scheuerman, Dowling and Campanaro all contributing songs. Not only does Lithium Burn sound like a band refreshed, it benefits from the addition of Campanaro’s Berklee-trained classical influence, and Lagomasino’s free jazz background.
Not every split can be mended. Sometimes things can't go back to the way they were. Lithium Burn does not conclude with a message of comfort or a supportive pat on the back. "You Get to Say Whatever You Want" turns out the lights on the record amid churning low-end tones and squeals of feedback. Read it as a personal indictment of impulsive behavior. Or read it as a protest song—a closing “fuck you” to the self-righteous and those who might confuse personal freedom with freedom from accountability to others.