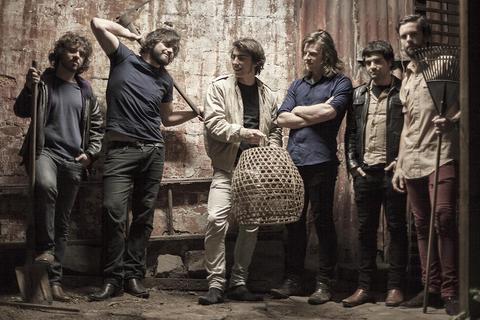 Emerging in 2011 to play an extended residency at infamous rock club Cherry Bar in AC/DC Lane, Melbourne, Money For Rope were a sprawling 6-piece rock band that got everyone in the rock’n’roll town talking.

For the devil-may-care blues rock band - backed by two drummers, and a sound fathered by The Saints, The Sunnyboys, and Radio Birdman, with a slight tinge of The Doors - it was the start of rapturous applause, serious hard work and more than a handful of shows conducted in casts and wheelchairs. Immediately signed by Wally Kempton of The Meanies, the band steadily released a series of 7” singles - ‘Slow Dance’, 'My House Or Yours', 'I've Had Days', and 'Disable Ksana' – while proving themselves in the often harsh climate of Australian rock’n’roll.

November 2012 saw the long awaited release of their eponymous debut LP [Thornbury Records], the sole musical soundtrack for that summer’s nationally televised Iron Man Series, just after their appearances at Australia’s preeminent music industry conference, BigSound. The band’s performance in downtown Brisbane, resulted in a Spanish tour, mostly as guests to The Bellrays side project Lisa & The Lips. A singles compilation album called Been In The Wars was exclusively released on 12" in Spain on the Grabaciones de Impacto label, while spin off gigs - including shows in London, Berlin, Copenhagen and showcase events Lleida Live Sessions [Spain], Monkey Week [Spain] and Nouvelle Prague [in the Czech Republic] - put the hard-working, groove-driven rock band squarely in front of European summer festival promoters who promptly booked Money For Rope into over a dozen festival dates.

Returning to BigSound in 2013, Money For Rope were this time seen by a SXSW staffer who swiftly extended an invitation to showcase at the hallowed Austin conference in 2014, an appearance expected to be strengthened by the number of US college radio stations steadily supporting Money For Rope’s record.

With a split EP [also featuring The Bowers] slated for March, and in preparation for their US tour in March, UK tour in May and a run of European festival dates that span from June to August, Money For Rope have stripped back to a core 4-piece membership [with second touring drummer] leaving Jules McKenzie [vocals, guitar, occasional saxophone], Michael Cini [bass, vocals], Rick Parnaby [keys, guitar and vocals] and Chris Valdemarin [drums] to present the leaner, hungrier band to worldwide audiences.

"A few songs into Money For Rope’s set, and the entire bottom half of Cherry [Bar] had turned into a mass of screaming, violently flailing scoundrels that swallowed any innocent bystanders on the sidelines". AU Review

"The no-frills approach to rock 'n' roll that embraces those visceral sounds, from cranked up guitars to raw, emotive expression – whether it be older favourites AC/DC and Cold Chisel, or that scarier ‘alternative’ stuff from the likes of The Wreckery, Hoss, and early Magic Dirt – it all came together in one hard-hitting sound from Money for Rope". BMA Mag

"This is one band that draws the crowd in with their energy and charisma, and make it impossible to stand still". Tone Deaf

"One wonders how the headliners of the evening will follow this wonderful spectacle". FasterLouder