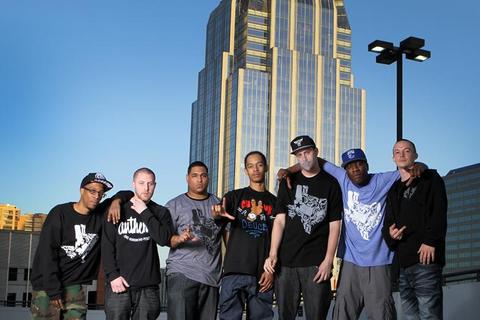 The League celebrated Berry’s second birthday since his abrupt passing on February 9, 2013. As they strategized on their summer 2013 debut album #LeagueShit, The Bully was in the room. The Bully’s vision formed in 2009 when his choice of eight members and three groups – Dred Skott, Da COD and Southbound – sat in a driveway at producer/singer/emcee Reggie Coby’s birthday party plotting a collaborative mixtape. Each group had its own budding local buzz, and Berry had started sharing everyone’s music with the others.

“Tay’s dead. That’s a big part of this. We can’t get more verses from him,” said Coby, Berry’s best friend and partner in the League’s street conscious duo Dred Skott. “After he passed, nobody could write much for six months. That took a lot out of us and now it feels like we’re a year behind.”

The LOEGz are still standing, and they haven’t been standing still.

In 2010 they debuted locally, played the South by Southwest Music Festival and Fun Fun Fun Fest and were featured on MTV Jams’ Texas All-Star Edition. They began sharing the stage with headliners including Curren$y, Wiz Khalifa, Wale, Slaughterhouse, Tech N9ne, Z-Ro, Trae, Chiddy Bang, J Cole, KRS-One and The Clipse. Coby slipped Devin the Dude a demo, which led to producing Devin’s Suite 420 lead single “What I Be On”.

The League be on the road; memories of infighting and getting lost on the subway mark the most fulfilling part of their journey to date. In 2011 they rocked over 60 shows in 10 states, including a West Coast tour with Jackie Chain for their Concealed Weapons 3 mixtape in May, and a national tour with Dead Prez in August.

A new tune at a typical pre-production session in September 2011 transformed Coby and Berry into two grown men dancing around in a room. That last beat to make The Bully knock everything off Coby’s desk and shake his studio chair around would become #LeagueShit’s “I’m Alive”.

Weeks later, the LOEGz released “Pressure,” featuring verses by Berry, Lil J’ (Da COD) and Lowkey (Southbound) for the A3C Festival compilation. October 2011 included an invigorating showcase and conference at the annual Atlanta festival, being selected as an AllHipHop Breeding Ground artist and then … Tay’s death from a pulmonary embolism on Friday the 14th.

As 2011 ended, the LOEGz were named one of Sonicbids’ Top 5 Hip Hop acts. They rocked more than 30 cities in 2012 as a supporting act on Strange Music artist Rittz’s Revival Tour and released The Plug EP produced by L.A.’s Shane Eli through DJBooth in December. All of this came from a collective effort by three groups in three years via the foresight of a now-absent leader.

When the Bully’s “League Sh-t!” isn’t sampled on The Plug EP, most of the League’s eight members and four acts — including his nephew and successor DoWrong — yell it in unison. They advance classic rap’s canon with great sonic range and lyrical techniques that old schoolers may have never seen coming.

“What needs to be expressed about the League of Extraordinary Gz,” said Texas music advocate Matt Sonzala, “is they rap harder than pretty much anyone right now.”