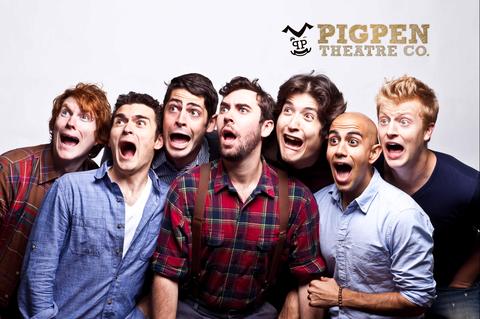 "A Redmoon spectacle multiplied by a Decemberists concert... It's tough to shake the notion that you're in at the launch stage of a group that could soon escape orbit." -Time Out Chicago

PigPen Theatre Co. began creating their unique brand of music, film, and theatre as freshman at the Carnegie Mellon School of Drama in 2008. Their debut indie-folk album, “Bremen”, was featured by American Songwriter and was named #10 album of the year in The Huffington Post’s 2012 Grammy preview. Their follow up EP, “The Way I’m Running”, was released on October 8th and was premiered by American Songwriter. They were also the first group to win the NYC Fringe Festival’s top honor for a play two years in a row in 2010 and 2011, produced several original plays off-Broadway earning them critic’s picks from The New York Times, Time Out New York, New York Magazine and more, ranking them in the top ten theatrical events of both 2011 and 2012.

PigPen is thrilled to be developing their debut children’s novel with Writers House, one of the world’s leading young adult literary agencies, as they are currently on tour as a band.