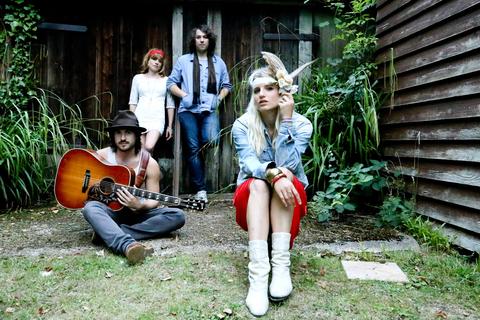 EP ‘WILD AMONG THE FLOWERS’ OUT NOW!

Wildflowers are a 4-piece band with a great vocal harmony sound that began in April 2012. Put together by Siddy Bennett the 22-year-old former Bristol, and now Brighton-based, lead singer and chief songwriter. The band’s line-up includes Siddy’s sister Kit Bennett on vocals, accordion and Hammond Organ, James Ashbury, Siddy's long-term co-writer on vocals, guitars, mandolin and banjo, and Kendal Sant on vocals, harmonica and acoustic guitar. Although Siddy fronts the band, all four members have great voices, producing a sound that is at once beautiful and exciting.

Growing up in several West Country towns and also in France, Siddy and Kit were raised as nomads, always on the move, living on boats, farms, in caravans and even on protest camps - the Bennett sisters have been strongly influenced both musically and morally by their bohemian upbringing, and this is apparent in the carefree, Indie Folk-Rock sound that is Wildflowers.

Siddy quotes Alanis Morrisette as a huge influence as well as The Eagles and Patsy Cline. But together Siddy and James’ are emerging as a brilliant song-writing team that is lyrically original and musically gifted. On this subject Siddy says…

“I don’t think anyone sings about heartbreak like Patsy and The Eagles, From the age of 7, I was addicted to their soulful deliverance, then at 10, Kit leant me the Jagged Little Pill album and I was hooked. I knew the album word for word. I truly believe her lyrics on that album have shaped me as a songwriter and as a person. “Girl Power” wasn’t the Spice Girls for me when I was a kid, it was Alanis”.

A recent review called Wildflowers “The bastard children of Fleetwood Mac and The Eagles”. Wildflowers songs are filled with great lyrics, tempo’s and harmonies, with a hint of the Laurel Canyon singer-songwriter scene of the late 60’s.

The bands debut EP "Wild Among The Flowers" is out now and is available from ITunes and via their website - www.wildflowersband.co.uk.