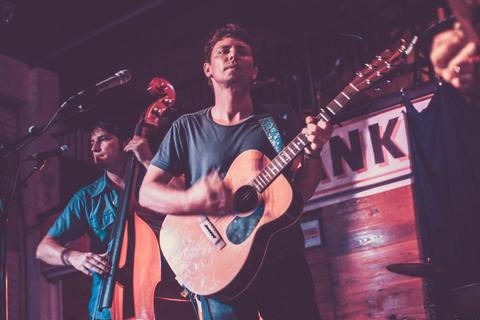 The Lonesome Heroes is a Cosmic American band from Austin, Texas. The music combines elements of indie rock, folk, and country into a highway revelry that unites decades, sounds, and regions. Described by Austin's KUT 90.5 FM as: "Western Americana, a cross-pollination of rock, folk, and country with psych and indie pop – influences from Texas and Brooklyn backgrounds. It’s the soundscape that occurs when indie rock and country artfully cross paths."
The Lonesome Heroes have toured extensively with 1000+ shows throughout 27 states. 2014 finds the Heroes recording their 4th studio record in Austin under the production guidance of Gary Newcomb at Public Hi-Fi and Z Sounds studios. The new record is scheduled for release in June 2014 following an official SXSW performance in March.
The bands most recent album Daydream Western was nominated by a panel of judges including Tom Waits, Keith Richards, and Suzanne Vega and went on to win the 2012 Independent Music Awards Vox Pop award. ABC featured their music on the TV Series Nashville in 2013. The Lonesome Heroes have shared the stage with countless up and coming and established acts including; Thao and the Get Down Stay Down, Deer Tick, Phosphorescent, Jim James, Mariee Sioux, Shovels and Rope, Wayne "The Train" Hancock, The California Honey Drops, Black Joe Lewis, and Gregory Alan Isakov.

Some Press for The Lonesome Heroes:
"An institution of Austin's psych-country scene."
The Austin Chronicle

"Like Iron and Wine and Wilco before them, the Heroes challenge themselves, and their audiences, by experimenting with a wide range of instruments and arrangements that unite alternative country and Indie rock into one cohesive, unique sound."
Pop Rocket, Flagstaff AZ.
"Few young artists have done as much to promote the local music scene as the Lonesome Heroes. There are touches of cosmic country and Sweetheart of the Rodeo in their psychedelic tinged, restless country tunes."
The Austin Sound

"The Lonesome Heroes describe their music as “cosmic American,” and fans of Gram Parsons should know what that means: Some light psychedelic pop and folk brightening the country grit."
The Missoulian