Meta and The Cornerstones 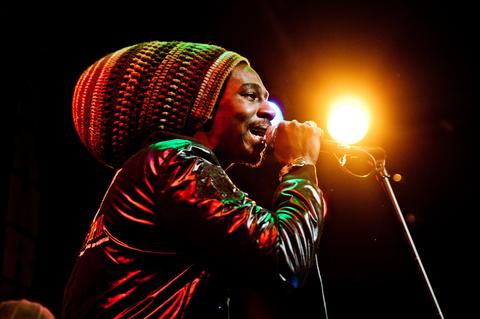 BIOGRAPHY
Meta’s unforgettable vocals are complemented by the incomparable sounds of his band The Cornerstones. Meta and The Cornerstones’ music is warm and embodying, immensely addictive, and destined to forever change the dynamics of Reggae music. Through pure musical genius and humble spirits, the band successfully fuses Reggae, Afro-Pop, Hip-Hop, Rock, and Soul music with passionate lyrics in English, French, Wolof and Fulani.

Born in Senegal, West Africa, lead singer of Meta and The Cornerstones, Meta Dia, discovered his love for music and desire to be a musician at a very young age. Listening to Reggae greats Bob Marley and Gregory Isaacs helped nurture his admiration and true appreciation for all types of music. As a self-taught musician, by age 14 he was performing on the street and stages of his hometown Dakar, Senegal. In 2000, Meta formed his first band YALLA SUUREN (God Bless), which was nominated for Best Hip-Hop/Reggae Group by the French Cultural Center the same year. Within two years, Meta had become one of the premier pioneering voices of the Hip-Hop culture in West Africa. After relocating to the United States, Meta immediately began collaborating with artists such as Sean Blackman, and Hip-Hop Ambassador Toni Blackman. Shortly after settling in New York City, he formed his visionary band, Meta and The Cornerstones.

With varying ethnicity, religion, and musical influences, Meta & The Cornerstones’ sound is a melting pot rooted in diversity, strength, and unity. Lead singer Meta Dia hails from Senegal; Israeli Guitarist Shahar Mintz; Texas born Daniel Serrato, and Keyboard Player Aya Kato from Japan, join Jamaicans Wayne Fletcher on Drums and Rupert McKenzie on Bass, and combine their creative differences from Africa, the Middle East, the Caribbean, and America, which are clearly expressed in the repertoire of the band’s music.

Meta and The Cornerstones channels the roots of Reggae while simultaneously breathing new life into the genre, thus creating what critics have called a “soul-pounding spiritual experience” during their live performances. Inspired by Alpha Blondy and Lucky Dubee, they have shared the stage with Reggae stars Luciano, Steel Pulse, Clinton Fearon, Israel Vibration, and Tanya Stephens amongst others. In 2007, the band was personally invited by Senegalese-born international superstar, Youssou N’Dour to perform at his annual African Ball concert at the Nokia Theater in New York. The following year Meta and The Cornerstones proudly released its first album entitled “Forward Music”. Of this work Clive Chin; Jamaican producer for The Wailers, Dennis Brown, and Lee ‘Scratch’ Perry, notes, “Meta and The Cornerstones have taken us back to the foundation of reggae music”.

As he continues to establish new grounds, Meta is now the first African artist to be signed to the iconic record label VP Records, the#1 source for Reggae Music. Through VP, Meta and The Cornerstones released their second album 'Ancient Power' on April 30th 2013. Recorded at the infamous Tuff Gong Studio in Kingston Jamaica, 'Ancient Power' links Africa to Jamaica by paying tribute to the ageless sounds of reggae preserved by the history of its legends. The 15-track work features Reggae legend U-Roy, as well as today’s leading artists Capleton and Damian Marley.

8:00PM Meta and The Cornerstones