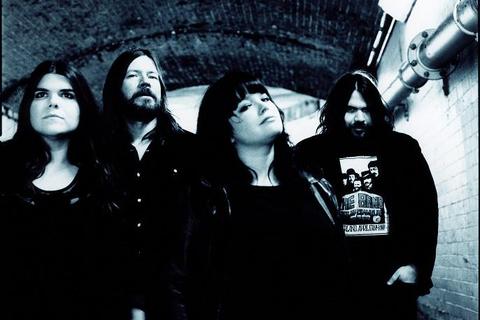 The Magic Numbers are a UK-based four-piece comprising two pairs of brothers and sisters (Romeo and Michele Stodart, Sean and Angela Gannon) who are known for their unique harmonies, melodic hooks, songwriting craftsmanship and their timeless sound.
The band quickly shot to media attention after selling out London’s Kentish Town Forum solely on the strength of their loyal following, before the release of their self-titled 2005 debut album. This record was subsequently nominated for the Mercury Music Prize. The Magic Numbers went on to become one of the nation’s best-loved bands and have shared stages with the likes of Brian Wilson, The Flaming Lips, The Who, Morrissey, U2 and Bright Eyes to name a few.
To date, the band have released three successful albums and many of their singles have graced the Top 20 charts, resulting in over a million album sales worldwide.
The Magic Numbers have famously collaborated with a number of artists, lending their trademark sound and harmonies to the likes of Ed Harcourt, Duke Special, the Divine Comedy and David Kitt. Romeo wrote a song for Jane Birkin’s album ‘Fictions’ and co-wrote ‘Close your eyes’ with the Chemical Brothers for their Grammy-Award-winning album ‘Push The Button’.
If the group aren’t busy in the studio, lead singer and songwriter Romeo Stodart can usually be found providing his effortless guitar playing for artists as diverse as the legendary Jimmy Webb and, most recently, Spritualized, on whose latest album, ‘Sweet Heart Sweet Light’, he features. Romeo is also an avid supporter of Damon Albarn’s Africa Express, having been involved since its conception at Glastonbury’s Park Stage. Out of this have come a number of Magic Numbers collaborations, including on the song ‘All I Believe In’ with Malian stars Amadou & Mariam, featured on the soundtrack to blockbuster smash The Twilight Saga: New Moon.
Having spent a lot of time in Brazil and Argentina, The Magic Numbers have developed a rapport with their South American audience and discovered a growing love of Tropicalia music. The band contributed the opening track ‘You Don’t Know Me’ to a recent tribute album for Brazilian’s legendary Caetano Veloso.
In 2012, the band’s Michele Stodart released her beautifully composed acoustic and country-inspired debut solo album, ‘Wide-Eyed Crossing’, on which she played most of the instruments. The album also features a duet with Conor O’Brien of Villagers on live favourite ‘Invitation to the Blues’.
The Magic Numbers will be releasing their fourth studio album early 2014.