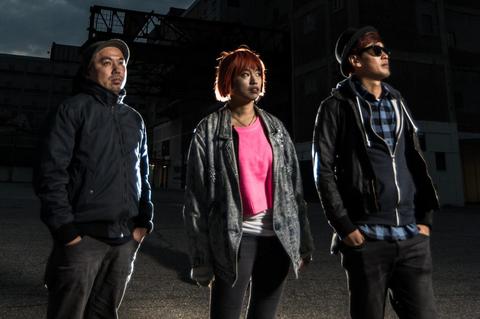 Love X Stereo is a Korean electro/alternative rock band comprising of Toby (guitar), Annie (vocal and synth), and Sol (bass). Plugging away since 1998, the team originally performed as part of the sk8 punk outfit known as Skrew Attack. Although Toby was the de facto leader, so many members came and went, the band barely triggered a blip on the media radar. However, when Annie jumped onboard in 2005 as the new vocalist, Skrew Attack skewed toward a different creative path and gelling with Gum-X drummer, Kim WoongKyoon, they unleashed their first (and last) album in 2008, Not Enough Translation.

Despite tight instrumentals and catchy melodies, the record didn’t quite garner much traction for commercial success. Shaken but not deterred, Skrew Attack proceeded to build considerable buzz in Seoul’s legendary live club district of Hongdae. But then in 2011, the drummer suddenly bolted from the band. With the trio now down to a duo, Toby and Annie struggled to figure a way to play live without a drummer. Determined to reboot, they decided to relaunch themselves by changing their band name to Love X Stereo.  Ditching punk riffs for synth chords, the pair picked up bass guitarist Sol along the way and a new triple treat was formed. Thanks to their new name tag, a new look and new sound was born.

In 2012, Love X Stereo jolted music critics inside and outside of Korea with their stunning debut EP, Off the Grid, and after stellar opening performances for the American dream pop band, Asobi Seksu, and European disco duo, The KDMS, the band skyrocketed to take center stage alongside international headliners at the Jisan Rock Festival and Korean indie icons at the Zandari Festival.

For Fall 2013, Love X Stereo will be releasing their new album worldwide and will be promoting it in North America at the CMJ Music Marathon (New York) and Indieweek Canada (Toronto)

“With its free use of synthesizing and effects, Love X Stereo’s music is danceable. And despite the fact that many genres aside from K-pop are being completely excluded in the harsh environment of the Korean music industry, its consistency in creating well-produced, visionary music continues to attract global attention. By infusing alternative music with electronic elements, Love X Stereo is creating a fresh new style of music that is continually gaining great respect from both sides of Korean independent music scene; rock and electronica.”
- Blurt Magazine USA ‘New Best Kept Secret : Love X Stereo‘

“Love X Stereo immediately caught our ear with their daring re-visioning of rock tropes and standards from the 90′s onward and in the process have evolved a sound quite their own...this band is decidedly different than the sounds to which we have become so accustomed on the radio, while still sounding polished and professionally recorded.”
- Music Zeitgeist USA ‘Love X Stereo : Rocking in the Shadows of ‘Gangnam Style’’

“Why spend time listening to something that is not worth it when you can, say, hear three songs that will totally blow your mind? [Love X Stereo] leave political or any type of discussions aside and show that PSY is not the only thing in South Korea, yet the music can be as addictive as “Gangnam Style” but more serious...a combination of vocalists and music with a touch of what seems like indie rock/alternative mixed with electronica that gives us something to dance and sing along to, something pop, something awesome. Rating 5/5”
- Skope USA ‘Off The Grid, Love X Stereo’