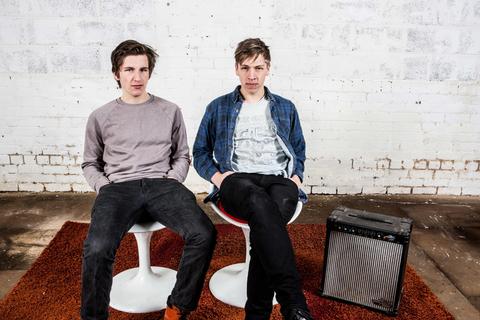 Listening to Drenge is like being jolted back to life, and that’s the
effect they’re having on the guitar music scene. A galvanising,
revitalising effect. It’s rock’n’roll - punk, metal, grunge - the way
they used to make it, and always will. It’s primal, feral, and resists
modernity, and yet it makes perfect sense in 2013, just as it will in
2023.

It’s a thrilling noise Drenge make, and an especially powerful -
viscerally impactful - one considering it is just made by the Loveless
brothers from Castleton, near Sheffield: 21-year-old Eoin on vocals and
guitars, and 20-year-old Rory on drums. Attempts to find clues as to
the origins of their music, with its frenzied surges and ferocious, you
might even say forensic examinations of the human condition, are
fruitless.

At the turn of the new decade, a word that the brothers had been
kicking around for a while became the title of a musical project that
would allow them to perform the songs that Eoin had been writing in his
bedroom at home.

Their school was visited by a group of Danish students. They noticed
that they used the Danish word for “boys” a lot. The word was “drenge”
and it seemed to sum up their mood. “We wanted it to sound hard, almost onomatopoeic,” adds Eoin.

“It was selfish,” admits Rory. “Nobody would get it. We thought what we
were doing was going to be really drenge. We’d say, ‘That’s so drenge,
that’s really drenge,’” recalls Rory with a taste of the mordant
glumness and acerbic brittleness that had become their speciality. It
was a neologism designed to connote “things that are unforgettably
uncomfortable and difficult”.

If the idea was to use the band name and the brutal riffs to alienate
people, they failed. Because in fact the songs were, in their own
misshapen way, really catchy and that’s what happened: they caught on, and the pair kept getting asked to play more gigs. That said, their
first professional performance, at the Redhouse in Sheffield, was only
attended by one man: a space-metal enthusiast wizard.

Following that false-start, though, no matter that songs such as
Bloodsports, People In Love Make Me Feel Yuck, Dogmeat and I Wanna Break You In Half were partly meant to reflect Eoin and Rory’s
repulsion and existential discomfort - many of them written during
Eoin’s gap year, when, he says, “I hated everything” - there was
clearly an audience for them.

Their first singles, the music, sleeves and videos, for Bloodsport and
Dogmeat, with their images of dead birds and allusions to blood,
suggested an overarching aesthetic and a coherent worldview, but they
insist their approach is more random than that, and a reflection of our
hyperstimulated “what-can-I-look-at-next society”, as Eoin puts it.

“I kept seeing a lot of dead birds,” explains Eoin, “so I said to
myself, next time I see a dead bird on the floor I’ll take a video of
it with my phone, so I did. Then I saw a bunch of flowers, and they
seemed just as interesting.

“We’re distracted people and our tastes change all the time,” he adds.

Not so distracted that they couldn’t commit to the hours and hours of
writing, refining, performing and retaking required for the completion
of their eponymous debut album.

“It was very intense,” recalls Eoin of the sessions at McCall Sound
Studios with producer Ross Orton, who has worked with M.I.A and Arctic Monkeys. He describes Orton as “a very unique producer, very talented.
He works you. We’d be in the small control room, at the height of
summer, drinking gallons of water, from 12 till 8 every day. Some songs
he’d want us to do 66 takes! Did I want to punch him? No, but I’d want
to punch Rory.”

Luckily, they managed to get out of the studio alive, and with their
debut album intact. With its tracks presented in the order in which
they were recorded over a two-year period, Drenge features all their
early material in all its raw glory, plus newer songs such as Let’s
Pretend, Nothing and Fuckabout that demonstrate Drenge’s
increasing maturity and sophistication while retaining the essential
Drengeness that makes them so unique. There are songs on there about homeless people, one about “being horrifically single”, and another titled Face Like A Skull about the realisation that underneath us all we are just bones.

“A lot of stuff gets hidden,” says Eoin. “People forget they have
skeletons inside them. They look in the mirror but no one looks inside
their eye sockets at what we are.”

Against all the odds - and they are quite odd - Drenge could become
very popular indeed. This they find only partly pleasing.

“Call it second-generation Catholic Guilt but I feel kind of annoyed
that we’re where we are,” reveals Eoin, somewhat surprisingly. “I’m
annoyed that someone else hasn’t done it and that we’re the new loud
guitar band on the block. I thought it would be someone twice as
insane.”

Drenge are insane enough. And incendiary, and intense. It's rock as we
know it, reinvigorated and refreshed. In that sense, they're not very
Drenge at all.