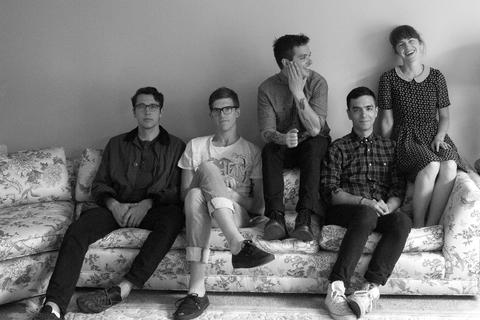 In late 2012, Wild Ones was on the verge of collapse. Guitarist Clayton Knapp had blown out an eardrum, the band’s original drummer left the group and his replacement, Seve Sheldon, was in the hospital with a punctured lung, practicing songs on a drum pad with a tube sticking out of his chest. The band’s members had funneled all of their money into a debut record, Keep It Safe, that had taken a year to write and nine months to record and mix. Fans and followers began to wonder if that record would ever see the light of day. It was make-or-break time. Wild Ones made. Instead of folding in the face of financial drama, injuries and personnel changes, Wild Ones took a deep breath and adjusted to its new surroundings. This band is used to adjusting. Since its formation in 2010, Wild Ones has insisted on operating as a DIY collective. The band recorded and mixed its debut as a group (with help from engineer David Pollock). Sometimes considering each members’ opinion meant endless revisits and tweaks to the album’s tracks. The process was time-consuming, but it was also worth it. “That was a reaction to the bands we had been in before,” says lead vocalist Danielle Sullivan. “This band was born out of our desire to have a democratic, all-inclusive music-making process.” Going it alone—even the artwork on Keep It Safe was created by Wild Ones keyboardist Thomas Himes—comes with its fair share of challenges. Most of Wild Ones’ debut was recorded in a two-story East Portland warehouse rehearsal space, where the band was surrounded on all sides by rock acts like Quasi and the Thermals. Wild Ones would get to their practice space around 8 am to record, often grabbing quick takes between thunderous drum solos from down the hall. “Somewhere on the record, if you listen close enough, you can probably hear the metal band next door,” Himes says. “When we went in that room in March, it was raining,” says Knapp. “When we finished recording in October, it was raining.” Keep It Safe, the album that finally emerged after well over a year of gestation, is bigger than the sum of its meticulously gathered parts. Even now, the band’s sound continues to evolve. Wild Ones’ members come from vastly disparate musical backgrounds—guitarist Nick Vicario was a Portland punk icon long before he turned 18; bassist Max Stein is a classical composer—and all of their experiences inform pop music that is influenced by everything from german techno to American R&B. These are sounds that don’t usually come packaged together, but in the able hands of Wild Ones, they seem like a perfectly natural fit.