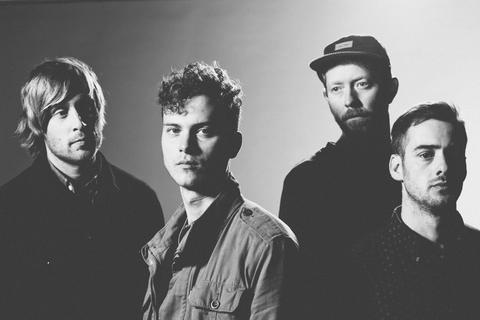 Aan is a fearless experimental pop band from Portland, Oregon, mixing richly textured guitars and acerbic lyrics with sugary three-part harmonies and sprawling soundscapes. Aan began as a once bedroom pop project of freakish folk balladry, but as of late, its more straightforward side has given way to deeper sonic explorations of more subliminal (and occasionally animalistic) territory.
Aan tours and performs as a four piece, often turning versions of their recordings upside down. Frontman Bud Wilson reaches octaves of the late Jeff Buckley, while maintaining a grittier timbre. The rest of the band follows suit by matching Wilson's caterwaul with cooing harmonies and a measured rhythmic pulse.

Aan's blend of discordance and harmony has earned the group touring support with alt rock juggernauts like The Smashing Pumpkins and indie legends Built to Spill. Aan has also performed alongside indie stalwarts like Wye Oak, Pains of Being Pure at Heart, Red Fang, Gardens & Villa, Bosnian rainbows and many others.

The band's debut record, Amor Ad Nauseum, will be released on Portland imprint Party Damage on February 4. Recorded over two years in various studios and a cabin on the Oregon coast, the album explores themes of the devotion, desire, complacency, loneliness, and desperation. Though the locations vary, a thick sonic thread runs track to track through the release's nine songs. More confident than most debut albums and more urgent than albums from most of Aan’s peers, Amor Ad Nauseum is a sticky, lush labor of love and lust.

Aan has performed at SXSW, Noise Pop, MusicFestNW, and countless dates across the United States. With the release of the band’s new LP, Aan will resume it’s hectic touring schedule.