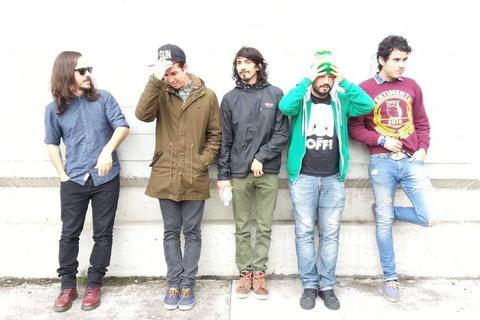 In 2011, Andrés Pérez, drummer of the band, left Mexico to study abroad and the band fell into a one year hiatus.

In 2012, with Andrés back in Mexico, the band reunites and in December has their first shows.

During March of 2013, the band records and self releases their first demos under the name ʻDemo Juvenil En Vivoʼ; it consists of a 3 song and video live recording done by the sound engineer of the band Carlos De La Riva.

The Demo was released as a free download through the bandʼs bandcamp. In December 2013, Mercado Negro a Radio Ibero 90.9 show (a college and alternative mexican radio station) awarded it to be the EP of the year.

In 2013, the band had about 50 shows in different venues all around Mexico City, Toluca, Puebla, Morelia, San Luis Potosí, Querétaro and Guadalajara. The band also took part in in Monterreyʼs NRMAL fest in Monterrey, Nuevo Leon, Austin TX, and Marvinʼs magazine festival in Mexico City.

Late in 2013 the band realeases their first studio recording, itʼs a single calledʻViolenciaRiverʼ also self released through the bandʼs band camp as a free download. The single placed No. 6 in Radio Iberoʼs Mercado Negro best songs of the year list, itʼs also in constant rotation inside Reactorʼs 105.7 and Panamerika.FM programming and has been featured in different music blogs anddigitalmediaʻbestoftheyearʼ lists,as well as taking part in the first LightandNoise.tv compiled release.

In January and February of 2014, the band toured inside Mexico, alongside Joliette (a mexican post­hardcore band). The tour consisted of 11 cities in three weeks, culminating in the Hey Oh! Festival with Heartsounds as headliners. The band also played ʻLos Grises Vol 2. Festʼ with Nazareno el Violento, Apocalipsis, Terror Cósmico and Los Viejos, among others.

In February of 2014, the band realeased the EP ʻVoces del Nuevo Continenteʻ, a split EP with the Venezuelan band The ZETA, consisting of 4 live songs and a half­ hour live session video recorded in ʻNoviembreStudiosʼ in MexicoCity. Itʼs available as a free download through Light and Noiseʼs band camp.

In March of 2014 the band is headlining Monterreyʼs NRMAL fest, and is featured in different official SXSW showcases in Austin TX.

For 2014 the band has planned a tour with The ZETA, and wants to release more studio recordings.