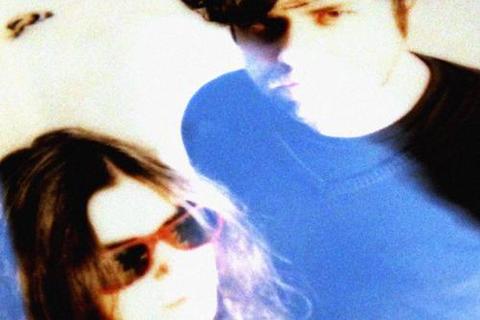 Sergio Pérez (co-producer and collaborator of El Guincho) and Luciana Della Villa (ex-member of riot grrrl-inspired Bcore trio, Sibyl Vane) have, for over a decade now, been entrenching a backbone deep into Barcelona’s musical landscape. Originally named Pegasvs, they were forced to change their name last year for legal reasons just before playing México’s Vive Latino. This eerie-pop electronic duo first emerged back in 2011 with only three demos on Soundcloud and a live video of ‘El Final de la Noche’, produced by the internationally acclaimed directing collective, CANADA. Shortly after that, the promising feedback they received from the general blogosphere was reinforced when they debuted with Pegasvs (CANADA 2012) and the obscurely-shaded sound of its mechanized drums, krautrock flourishes and the entwined notes of Sergio’s dissonant synths and Luciana’s blissful aerodynamic verses. They were in iTune’s top 10 for one week, reaching number three in Spain, while ‘Brillar’ became the week’s single in the Mexican division of the digital store, obtaining well over 23,000 downloads. The vinyl edition, as well as the CD, sold out before its first birthday.

That same year, they started touring with a live performance during the projection of ‘The Cabinet of Dr.Caligari’ (Robert Wiene, 1920) commissioned by NBC Universal’s SYFY TV Network. To the audience's surprise the band composed, in situ, an original soundtrack for this german expressionist classic. During the following months, Svper toured throughout Spain, consolidating their presence in the country’s most iconic festivals; from Barcelona’s Primavera Sound, Sonar and Faraday Festivals to Galician Festival Do Norte, Castilla’s Ebrovision and Madrid’s El Dia de la Musica. All this before closing the year winning best 2012 album and single in Red Bull's Panamerika.

During the following year, the band broadened their horizons by playing festivals in Poland, Luxembourg, Germany and France where the Dionysiac Tour team joined the project as collaborators.

Now working on their upcoming sophomore album, with Primavera Sound as their international booker, the interest generated by this mediterranean duo continues to grow far beyond the Iberian peninsula and on into the Ukraine, the United Kingdom, Chile, Argentina, Colombia and most recently, SXSW in the Unites States.