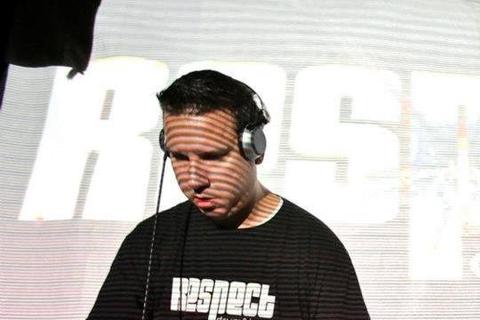 MACHETE ignited his musical journey back in 1992 as DJ Rob G,
spinning Hip-Hop at Hollywood afterhours events such as No-Doz, What?, and Caffiend.
Los Angeles underground rave culture was in it’s infancy, but Rob found inspiration thanks to techno-infused breakbeat music emerging out of England via vinyl records championed by DJs Raw, Curious, and Oscar da Grouch.
These frantic, bass-heavy tracks that evolved from old-school drum breaks layered with HipHop and Reggae samples were intriguing and propelled him in a new direction.
Rob, encouraged by his peers, changed his professional name to Machete in 1994…
a title meant to evoke the nature of his mixing and cutting skills in relation to this new Jungle music.
As DJ Machete, Rob helped put Junglist Platoon on the map scoring gigs at nearly every Jungle party in the Greater Los Angeles area.
A brief residency with Los Angeles mega-promoter Insomniac, plus a noted mention in URB Magazine’s NEXT 100 Issue (1998) also garnered much attention. Rob was then featured on various dates of the infamous KungFu-Knowledge Tour of 1999, placing DJ Machete alongside many of the world’s best including DJ Craze, Mampi Swift, and Rob Playford.
Machete is well-traveled and has showcased his skills internationally in Italy, Costa Rica, Canada, plus numerous cities and states across the USA including Hawaii, New York, Washington DC, Miami, Chicago, Atlanta, Texas, Minneapolis, Seattle, Portland, San Francisco and many more. Machete also made history as one of the very first Jungle/Drum and Bass DJs flown to perform in Anchorage, Alaska.
In March of 1999 the Junglist Platoon began hosting a weekly event called RESPECT
with Machete in charge of talent bookings, promotions, as well as being a resident DJ.
In March of 2000, Machete organized a RESPECT one-off at the Winter Music Conference in Miami which successfully placed the RESPECT brand at the forefront of Los Angeles Drum and Bass.
After 13+ years, RESPECT is the longest running Jungle/Drum and Bass weekly in Los Angeles in addition to being one of the most successful clubs in the United States. RESPECT is globally known for bringing the best international and stateside talent and continues to do so after settling into it’s fifth and most current venue, The Dragonfly in Hollywood.
In 2014 Machete is busier than ever, occasionally opening for mainstream Hip-Hop acts at House of Blues – Sunset Strip combined with DJ residencies at RESPECT, spinning at one-off events, hosting a weekly RESPECT DnB RADIO program, taking on a new role as an agent at Circle Talent Agency, and engaging production projects proving his versatility as an artist.
DJ Machete’s longevity speaks for his talents, dedication, and determination which has surely solidified his place as a force in the world of electronic music.