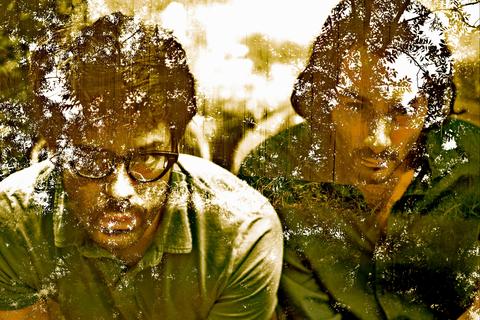 As the album’s title suggests, Gringo Star are insouciant explorers, tossing the paddles overboard and drifting on the currents of their lackadaisical curiosity across a rippling sonic ocean, out to the far edges of rock & roll. Shot pulsing from a vintage Leslie speaker, their guitars, keys and vocals pirouette across the astral plane, the psychoactive ingredients of their echo-slathered, doo-wop-indebted indie gems. Santo & Johnny, The Stooges, Ritchie Valens, Marc Bolan, Percy Faith, Sam Cooke, the men working on the chain gang—uh! ah!—they’re all here, their electric ghosts reaching across time, tapping Gringo Star on the shoulder like the crossroads devil to Robert Johnson, bestowing secrets, passing torches.

Floating Out to See plays like a long-forgotten polaroid excavated from the bottom of some mysterious thrift-shop bin, scanned into a computer, emailed to your smartphone and Instagrammed with a nice washed-out filter—a shimmering post-War daydream plucked from the mid-20th century and dropped wide-eyed into the hyperlinked now. No other group today so effortlessly distills the essence of nascent rock & roll into something so entirely modern yet authentically, spiritually tethered to the past.

If you know a little about the Furgiueles’ roots, it all makes sense. “Our grandad started out in radio in the ’40s and ’50s in Columbus, Ga.,” Nick explains. “He was a huge promoter of R&B back when it was still super segregated, and he was playing black music and putting on shows with Little Stevie Wonder, James Brown, Sam Cooke & the Soul Stirrers, a lot of Gospel shows. So we grew up hearing all these stories, listening to all this music. Our grandfather was inducted into the Georgia Music Hall of Fame posthumously. And my grandma—all her photo albums are like Jackie Wilson shirtless backstage, hanging out.”

Not to mention how Nick and Peter used to raid their parents’ record collections, cutting their teeth on the likes of Buddy Holly, The Animals and The Kinks. “Our favorite music comes from the ’50s,” Peter says, “and that music influenced all the ’60s bands we like.”

With their family’s R&B connections and their young obsession with early rock & roll, it wasn’t long before the two brothers started making music themselves. When Nick was 15 and Peter just 11, they picked up bass and drums, respectively, formed a rhythm section and joined their first garage band. “We played together in the house and messed around on a little two-track,” Nick says. “We’ve been writing songs together since before Peter was a teenager. We even played his 8th-grade dance.”

A few years later, in 2001, with Peter still in high school, they started their first serious band, A-Fir-Ju-Well, and released their debut record on International Hits. During the second half of the decade, they formed Gringo Star and dropped a pair of lauded records—2008’s All Y’all and 2011’s Count Yer Lucky Stars—both engineered by James Salter (Black Rebel Motorcycle Club) and helmed by sought-after producer Ben Allen (Animal Collective, Gnarls Barkley, Deerhunter). Since then, the band has toured relentlessly across the U.S. and Europe building a diehard underground following while sharing bills with everyone from Cat power and Feist to The Black Angels and Weezer, and also touring with Wavves, Best Coast, And You Will Know Us By The Trail of Dead, The Toadies and fellow Atlantans The Black Lips.

While recording the new Gringo Star album—a psych-rock symphony to the cosmos, awash in shimmering compact organs, latin drumbeats and Status Quo-style space riffs—the band tried a new approach. Instead of enlisting a respected producer/engineer combo like Allen and Salter, they struck out for uncharted waters on their own. “It’s been cool without the safety net of a producer,” Peter says. “This record is more ourselves. There’s no other filter besides our filter.”

Recorded in the band’s basement practice space at Peter’s place in Atlanta, Floating Out to See is also the first time that Gringo Star has tried home recording. “With the last two records,” Nick says, “we’d just go into the studio for a couple weeks and crank it out. This time, we threw down a chunk of cash on a super-nice microphone, and recorded everything in our leisure, which led to a lot more experimenting.”

Since they only had the one good mic, the Furgiueles and Kaufmann began a one-instrument-at-a-time, trial-and-error layering process that began with the drums, played by Peter and part-time touring drummer Cam Gardner of Washed Out. Some of the songs they’d never even played before the day they recorded them. In such instances, they’d run down the new tune a few times until Gardner had his head around it, then he’d crank out the drum track by himself without anybody else playing—just from memory. “And that’s how Peter did it, too,” Nick says. “A blind drum track. I would stand in the room with them, and just kind of play the motions and signal the changes.”

In the wake of some significant personnel shifts (most notably the departure of third writing member Pete DeLorenzo), Floating Out to See is also the first Gringo Star record to feature the Furgiuele brothers as the band’s sole lead vocalists/songwriters. “We always loved Pete D’s songs and we loved playing with him,” Nick says, “but I feel like there’s more continuity now than ever before. Despite going through three drummers in the past year, Me, Peter & Chris are feeling super tight.”

It’s no mistake that the final track on the new Gringo Star album is called “The Start.” Because this ending marks the beginning of a new era for the band. They’ve paid their dues over the last decade, weathering multiple lineup shifts and the often-brutal gauntlet of the road on two continents separated by thousands of miles of ocean, building their following the old-fashioned way; they’ve studied in the studio with the masters, and they’ve set out on their own intrepid sonic odyssey, returning with the blinking-light palette of esoteric sounds and unforgettable hooks that comprise their infectious new record, Floating Out to See. And now, they’re riding this slowly cresting wave toward what looks a whole lot like a breakthrough.