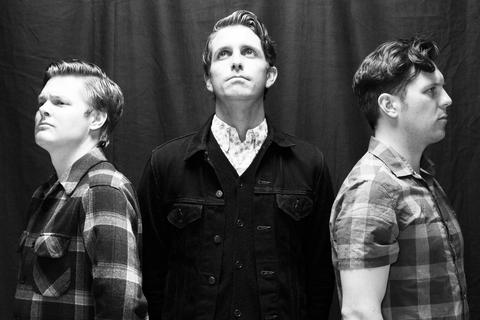 Tijuana Panthers come striding proudly out of their hometown of Long Beach, California, with Semi-Sweet, their most fully realized album yet. Semi-Sweet has every Panther contributing a part in the entire album-making process, all the way down to brainstorming new songs on drummer and singer Phil Shaheen's ukelele. Traditional Tijuana Panthers engineer Victor Orlando Nieto split the sessions for Semi-Sweet with new engineer Matt Vasquez, which worked with the new creative process to give the Panthers' latest a different feel, says guitarist & vocalist Chad Wachtel – something instantly apparent from the first jittery notes of the Swell Maps-meets-Urinals DIY clatter-pop opener “Above Your Means.”

From there, it's a twist-and-turn-y journey through at least four decades of off-center-from-the-heart music. “Tony's Song” matches the relentless energy of the Wipers with instantly catchy beach-punk harmonies, while “Father Figure” left turns towards the kind of complicated jangle-pop of New Zealand's Verlaines. “Push Over” is like some kind of Howard DeVoto demo that suddenly splits into a Mickey Baker guitar line, and “Juvy Jeans” is pure my-daddy-was-a-New-York-Doll teen-punk hilarity. (Or maybe the Dead Milkmen? Phil is a longtime fan.) Of course, the surf guitar they built their band on is still surging along – leading the band through their moody “Baby I'm Bored” and then bouncing into the darker-than-it-seems “Forbidden Fruit.” And then there's the pitch-perfect Nerves cover, a reverent redo of “One Way Ticket” by a band that in sound and sentiment both were pretty much the Tijuana Panthers of their day. They're really just aesthetically simple dudes, says bassist and singer Dan Michicoff – they know their songs are done when they not only sound right but feel right, and when they've got that same rare combination of harmony and velocity and honesty that's pushed bands out from their garage since the invention of the electric guitar.