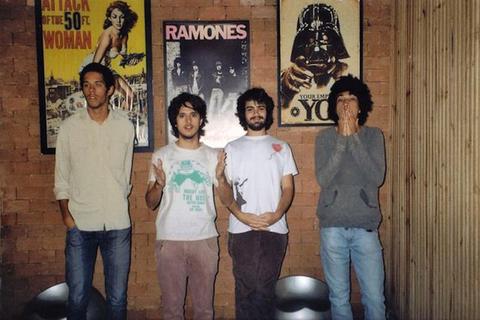 Fernando Almeida and Benke Ferraz met in high school in the central Brazilian city of Goiânia, far from the thriving cultural metropolises of São Paulo and Rio, yet nevertheless in the shadow of the icons of their homeland's great musical heritage -- not bossa nova and samba, however, but psychedelic pop. Still in their late teens, the music they make together, recorded on borrowed gear and with self-taught technology in their parents' basements, shares the spirit and soul of Tropicalismo, but it has also blossomed in the light of the current international DIY underground. Almeida is the poet and singer, Ferraz is the multi-instrumentalist and gear-head, and together, as Boogarins, they write songs that reach beyond their years and any restrictions of geography or genre: timeless pop untethered from categorizations.

The songs that are collected on As Plantas Que Curam (translated: Plants That Heal) were recorded mostly as a duo, before they ever considered playing live, before they found a rhythm section or even a name -- the Bogarim the band was named for is a jasmine flower the ancients say "smells like pure love" -- and the album speaks with an intimacy and off-kilter fragility that reflects those humble origins. Yet from the exotic psychedelia of "Erre," in which Ferraz's fuzz guitar spirals around Almeida's yearning melodies, to the jangling melancholy of "Doce," there is a sophistication and depth in the songwriting and playing here that shows a rare talent, each track filled with beauty and freewheeling emotion. A snapshot of Boogarins' youthful ambition and dreams, As Plantas Que Curam is a love letter from the green fields of Goiânia to all of us.