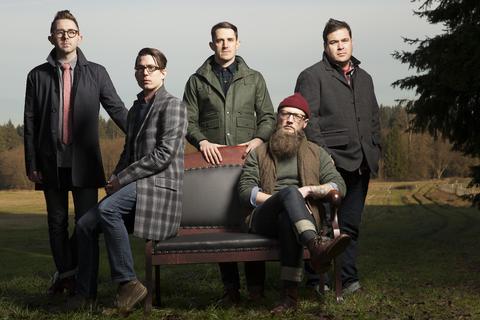 For the members of Seattle-based band Kris Orlowski, making music is about more than fulfilling personal agendas; it’s about creating something that touches the soul. Through relatable storytelling, husky harmonies and Orlowski’s knack for creating emotional highs, the band has done just that: touched the souls of people across the Pacific Northwest – as well as across the country, since 2010. Now, in the wake of releasing three well-received EPs, touring the country and having songs featured on hit television series including “Grey’s Anatomy” and “Private Practice,” the act is preparing to release its first full-length album, Believer.

“The songs we’re writing now are evolving the same way our band is,” says Orlowski. “It’s not just one voice – but five voices. And yeah, it’s my vision, and I’m leading the charge. But in these songs, there is more than just one thing we’re trying to say.”
Having recently collaborated with a 17-piece orchestra for the Pieces We Are EP, Orlowski wanted to go in a new direction with the new material. That’s why, along with band mates Mark Isakson (guitar), Torry Anderson (keys/vocals), Greg Garcia (drums) Tyler Carroll (bass) and Jonathan Warman (bass), Orlowski sought out producer Martin Feveyear of Jupiter Studios in Seattle. Feveyear, who has worked with acts including Modest Mouse, Presidents of the United States of America, The Lumineers, and Death Cab for Cutie, gave new focus to the project.

“There are times when you’re too close to the songs, and having a producer like Feveyear there – who knew where we were going with this record – he was able to kind of get us there,” Orlowski says.

In the spirit of getting there, the songs that make-up Believer were woven together along the West Coast: from the salty shores of Seaside, Ore., and Orcas Island’s Doe Bay, to the corners of Orlowski’s Seattle apartment – and the practice spaces in between.

The result is more punch-y and experimental; a cinematic compilation, which echoes the band’s earlier folk-infused traditions while shedding the lush sounds of a full orchestra for more traditional rock and pop arrangements. Calling on personal experiences and thoughtful reflection, and inspired by the work of authors like Flannery O’Connor and Paulo Coehlo, Believer may be the band’s most honest, empowering and upbeat collection yet.

“I think the album will inspire some hope, but I also think it will go beyond that and give people a reason to act,” Orlowski says.
In other words, it might encourage finding something to believe in.