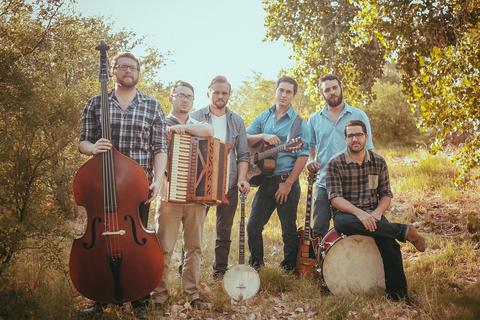 JARED & THE MILL TO EMBARK ON NATIONAL TOUR

PHOENIX, ARIZ. (February 17, 2014) -- Breakout Phoenix-based band Jared & The Mill will embark on its first national tour later this month. A performance on February 19th in Las Vegas, Nevada at The Palms Lounge will kick the run off for this group of six skilled born-and-bred Arizona musicians who joined together in 2011 and quickly developed a following through tours of the Southwest and by playing with acts such as Cake and The Killers. The tour will include stops in Salt Lake City, Utah; Boise, Idaho; Missoula, Montana; Denver, Colorado; and Chicago, Illinois.

Known for a distinct sound the band really can't successfully label (nor do they intend to), Jared & The Mill's impressive 2013 included an incredible reception at its South By Southwest showcase in Austin, Texas; a great homecoming in Phoenix playing the St. Patrick's Day Festival in Tempe with Flogging Molly; landing a spot on the same bill as Heartless Bastards, The Roots and The Shins on the McDowell Mountain Music Festival in Phoenix; and recording and releasing its debut album, Western Expansion, to rave reviews. The band, whose influences are wide-ranging, have been compared to many different artists, but more than anything, they would like to think that some shred of the Southwest -- their home -- can be found in the heart of their music.

For more information on Jared & The Mill and the upcoming tour, visit: www.jaredandthemill.com.

Jared & The Mill formed in the summer of 2011 and have since become not only a well-known folk band from Tempe, Arizona, whose music has been featured in the hit ABC-TV show Nashville and on the national Starbucks playlist, but also a tight knit group of friends. Their fellowship is visible on the stages they play and on their heartfelt recordings for whomever wishes to experience their music, and their recent success is a product of their commitment to that music and to each other. The brand of music these talented musicians create, is influenced by their home in the Southwest and the heritage from the Americana, Country-folk, and Rock 'n' Roll they were brought up to love. Phoenix-based radio station X 103.9 and Scottsdale’s KWSS 93.9 Radio have been backing the band over the past year and have helped expand the band’s local influence throughout their career. Now, radio stations, critics and music lovers nationwide are embracing Jared & The Mill’s signature sound as well.

"Our greatest adventures have yet to come, and we can't wait to become better acquainted with our great American Family…we'll see everybody on the road!"