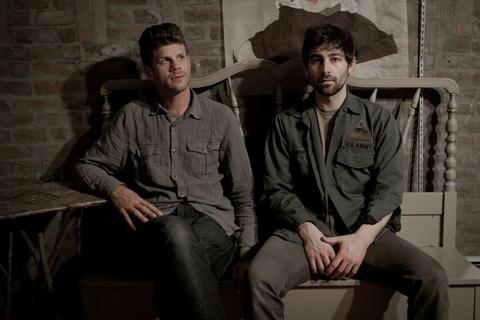 "Star Rover, the Brooklyn twosome of guitarist Will Graefe and drummer Jeremy Gustin, specializes in an alluring sort of pastoral punk that suggests a collaboration between Deerhoof and John Fahey."

For their debut album as Star Rover, guitarist Will Graefe and drummer Jeremy Gustin began with the music of John Fahey and ended up in their own corner of a skewed, over-driven, weird America.

Will Graefe (Jesse Harris, Larkin Grimm) and Jeremy Gustin (Delicate Steve, Larkin Grimm, Jesse Harris) spent 2012 in a Bushwick loft – modest but airy and bright, with a wall of windows – so that, in the moments when their attention wavered from music, they could watch garbage trucks unloading across the street. Perhaps this is the reason that their attention so rarely wavered. While dissecting the records of John Fahey, Sonny Sharrock, Lighting Bolt, and Leadbelly, among others, they discovered other music yet-to-be-played and yet-to-be-heard.

After months of improvising, writing and rehearsing, Graefe and Gustin recorded Western Winds Bitter Christians with engineer/producer Cedar Appfel (Nature Boy, Masterface, House on a Hill) live in two urgent sessions. By the end of tracking, both sobriety and a fine vintage tape machine had been sacrificed. And yet, listening to the dirge that opens Rye, the last tune of those sessions, one hears a practiced calm in the face of inebriation and exhaustion.