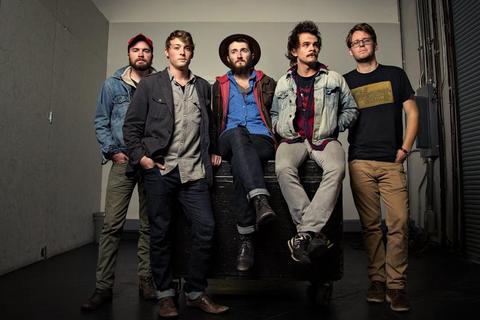 The Black Cadillacs are a blues-based indie rock band from Knoxville, TN. With members from each of Tennessee's major cities, the state's famous sounds are well represented. Nashville’s recent brand of rock 'n' roll revival takes center stage, accented by authentic Memphis blues/soul and a hint of Knoxville country distill into a sound rich and southern as it is alive.

Alongside their native influences, The Black Cadillacs know their rock history. "Bands like The Rolling Stones, The Who and Pink Floyd laid the foundation for us. With the success of artists and bands like Jack White and My Morning Jacket, it’s easy to see that blues-based rock n’ roll still resonates with audiences,” says guitarist, John Phillips. "We were inspired by the same bands and we’re just trying to keep those sounds alive in our own way."

From Memphis to Knoxville, and from Jagger to Jack White, The Black Cadillacs' label debut Run pulls together more than 400 miles and 40 years worth of influences for a thrilling 11 track album.

"Run is a veritable tapestry of lush blues and Southern soul, with Phillips and guitarist Matthew Hyrka weaving varicolored webs of texture and melody over the solid foundation of bassist Philip Anderson and drummer Adam Bonomo," says Metropulse's Mike Gibson.

Released in June 2012, Run represents the band’s honest attempt to capture the dynamic energy of their live performance. The instrumentation was tracked live, with the entire band in one room, the way the songs were written and perfected on the road. The results are undeniable. Tracks from Run have been featured in over a dozen major Network TV shows including, Nashville, Whitney, Dallas, Army Wives, and Necessary Roughness, etc…

Their live set is where this well-orchestrated yet explosive blend comes to life. Playing more than 100 dates in the past year, including sets at MPMF, CMJ, VOODOO Experience, and a SOLDOUT show at The Bijou Theatre, The Black Cadillacs know when to let frontman Will Horton lose and when to join him with a flurry of sound.

"The group displayed amazing energy from beginning to end," says Consequence of Sound about their VOODOO Experience performance. RedBull Sound Select says,"They are often best when Horton showcases his voice over spare instrumentation, such as in a new song ‘Truth,’ when it’s accompanied in the verses by a single plucked guitar. When the song hits the chorus and Horton pleads, "Why don't you give me some truth?" over the full band -- the reunion is epic.”