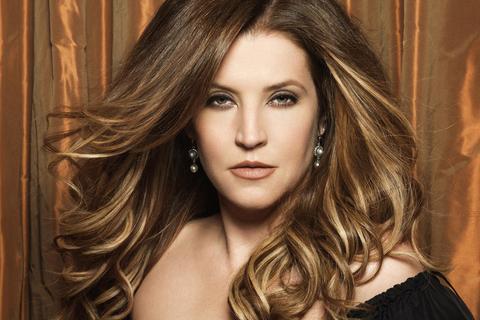 With all the hoopla that has surrounded her, it’s easy to forget that Lisa Marie Presley is at heart a simple Southern girl whose earliest musical memories are of obsessively listening to 45’s in her bedroom at Graceland and of her dad catching her singing into a hairbrush in front of a mirror at the age of three.

The Memphis-born Presley reclaims those roots on her new album Storm and Grace — an Americana-inspired showcase for her songwriting talent and smoldering alto voice. Produced with elegant restraint by 12-time Grammy Award-winner T Bone Burnett, Storm and Grace is a marked departure from Presley’s previous albums, 2003's gold-certified To Whom It May Concern and 2005's Now What, which both debuted in the Top 10 on Billboard’s Top 200 chart, “I love the songs, but I think I was hiding behind a lot of sonic layers because it was scary to go out there,” Presley says. “It’s easier to bury yourself in the noise so you don't stand out. This album is a lot more stripped-down and naked, both musically and lyrically.”

The album’s rootsy golden tone is set immediately with the opening track “Over Me,” with its echoey guitar line, burping bassline, shuffling backbeat, and lyrics that lament a lover who’s replaced her, while the ominous, swampy lead single "You Ain't Seen Nothin' Yet" and the pedal-steel and mandolin-driven title track sound like they could have been recorded during an impromptu back-porch jam session.

Presley’s previous albums did, however, enable her to work through the rebelliousness she was feeling when she launched her career as a singer-songwriter in 2003. “I was angry at all that I was potentially up against — all the expectations — and I was puffing myself up as a protective mechanism,” she says. “At the same time, I was being pushed by the team around me to be a pop star, and to do all these crazy things that I really didn’t want to do.”

After completing a well-received tour to support Now What, Presley retreated from the music industry, relocating to the English countryside with her husband and young twin daughters and shedding the people and things she felt had demoralized her. “I got rid of a lot of the toxicity around me, but I also lost a lot of my drive and love for songwriting,” she says. “The creativity was kind of wrung out of me.”

Not wanting to abandon her craft, and after gentle prodding from her new manager Simon Fuller, Presley agreed, in the summer of 2009, to sit down with some new songwriting collaborators, who included three Brits: Sacha Skarbek (who’s written with Adele and Jason Mraz among others), and singer-songwriters Ed Harcourt and Richard Hawley, who is also a member of Pulp. “There was no agenda,” she says. “I wasn't trying to write a hit or to please any particular audience. I was just enjoying the process of being creative with great people who really love music.” The first song to emerge was a gentle ballad called “Weary,” which Presley wrote with Hawley. “That one turned the tide and sparked the whole sound of the record,” she says. Over an eight-month period, Presley wrote 28 songs including “Storm and Grace” and “How Do You Fly This Plane?” with Hawley; “Un-Break” and “Close To The Edge” with Skarbek; and “Soften The Blows” and “Over Me” with Harcourt.

Taken as a whole, Storm and Grace is a unflinchingly honest piece of work from this songwriter, who, though known for her tough frankness, has managed to create a tender, consoling thread that runs throughout the album. "Weary" may concern a relationship that didn't work out, but it is suffused with a genuine warmth, as Presley sings: "I will always love you/you can move on, dear."

For Presley, the album’s conciliatory theme grew out of wanting to have peace in her life after a period of turmoil and letting go of what no longer suited her. “There were a few years there where everything around me had fallen apart,” she says. “All the things that had become my foundation were gone and I had to shed a lot of skin. I found myself really vulnerable afterward and that's what birthed the album’s vibe. It’s me without any attitude or anger at a time of rediscovery.”

Impressed with Presley’s songs, Fuller sent the demos to producer and musician T Bone Burnett, who is known for his work with such artists as Allison Krauss and Robert Plant, B.B. King, Willie Nelson, Elton John and Leon Russell, and scores of others. “I got a call that T Bone really liked them and wanted to meet with me,” Presley says. “When I saw him, he said, ‘I don’t want to do a big song and dance. I really like the record and I’d love to produce it.’”

“When Lisa Marie’s songs arrived, I was curious,” Burnett says. “I wondered what the daughter of an American revolutionary music artist had to say. What I heard was honest, raw, unaffected, and soulful. I thought her father would be proud of her. The more I listened to the songs, the deeper an artist I found her to be. Listening beyond the media static, Lisa Marie Presley is a Southern American folk music artist of great value.”

“It makes me feel really good to hear him say that because I know he means it,” Presley says. “His enthusiasm and support gave me a lot of confidence. His even doing this project and bringing in his musicians [who include drummer Jay Bellerose, bassist Dennis Crouch, guitarists Jackson Smith and Michael Lockwood, and keyboardists Keefus Green and Patrick Warren] injected me with new life. They were all outstanding.”

Presley is also glad to have a new label home, Universal Republic, which will release Storm and Grace on May 15th. “I have a new team around me, and none of the things that brought me down before,” she says, adding that although she is nervous about how Storm and Grace will be received, the joy of knowing that she’s connecting with an audience makes it all worth it.

“I’m compelled to do this because I’m a music lover and I feel that music is so important in the world. That’s what drives me — pouring your heart and soul into something and hoping that it can change someone’s life in some way. I’m looking forward to performing live and interacting with people who are there for the music and nothing else. Getting that instant reaction is the best part.”