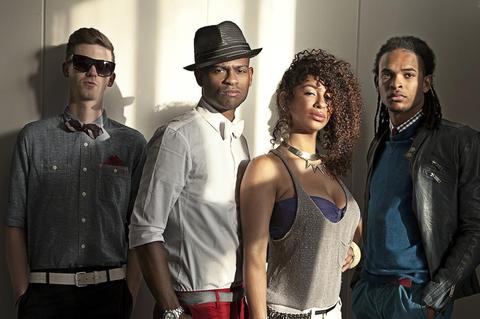 Some people categorize their music as Global Bass, others prefer labeling it Tambutronic but one thing is for sure: it’s a wild and colorful explosion of energy, and always seems to set off some serious movements on the dancefloor!

The name Kuenta i Tambu translates to “Stories and Drums” from Papiamentu, which is the native language of the Dutch Caribbean islands Curaçao, Aruba and Bonaire. The group is based in Amsterdam, came together in 2005 after a series of educational projects at schools and theaters to introduce the music and culture of Curaçao to children in the Netherlands.

In the early days band members were involved in establishing the sound and identity of KiT. Fast forward to the here and now KiT performances stand for high energy shows, with hypnotizing beats and dazzling percussive interplay between the band members.

In addition the group has also been collaborating and producing remixes for various international artists and DJ’s such as: Gregor Salto, DJ Roog and Dutch Hip Hop sensation The Opposites.