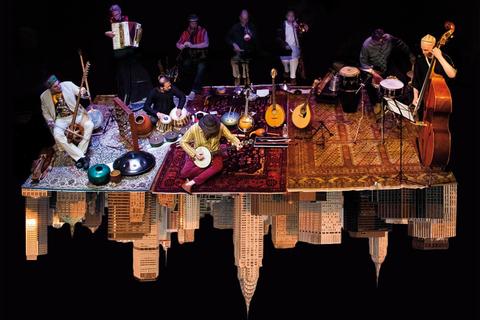 Radically multicultural and poly-stylistic, New York City’s TriBeCaStan is one of contemporary music’s most vibrantly eclectic ensembles, using diverse instruments from around the globe to create an exotic palette of sonic colors and melodies.

The New York Times describes TriBeCaStan’s sound as “genre-bending jazz and world-music” and The Washington Post hails them as “an international jazz and folk festival unto itself, fusing Balkan, Middle Eastern, Indian, Latin American, and African musical elements to bold and dazzling effect”. According to The Village Voice the band embodies “New York cool, explorer energy, and outer space vibes”.

While nailing down the multifarious culture of TriBeCaStan might be challenging (especially since the band purposefully aims to tear down the walls between world, folk, and jazz), the final package is the result of a virtuosic and exuberant collaboration between some of New York’s finest jazz and world musicians—many of whom have played and collaborated with legendary innovators, including Ornette Coleman, Violent Femmes, John Corigliano, James Brown, Taj Mahal, Willy DeVille, and Eddie Harris.

Some may wonder why TriBeCaStan plays “peasant music in an affluent zip code.” Their music offers a radical diversity—not purity or homogeneity—that truly represents contemporary urban life. “Our music,” says Jeff Greene, “is ultimately about the cross-fertilization of musical idioms. Between our travels and life in New York City, we get to witness, first-hand, all the wonderful ways in which the world’s cultures combine to create new musical forms and expressions.”

Recent live performances include high-profile New York shows at the Rubin Museum of Art, Le Poisson Rouge, and a sold-out album release show at DROM, as well as Festival and club shows in Germany, the Netherlands, and the Czech Republic, as well as a jam-packed two week tour of California. With TriBeCaStan’s 4th album New Songs From The Old Country having released October 1st via Evergreenee Music, TriBeCaStan continues to find inspiration in everything from Swedish nykelharpas to deep funk grooves.

“Whether it’s the far-away folk and roots traditions of the world, or the blues and jazz music of our home country,” says John Kruth, the band’s primary composer, “at the end of day, our sound derives from one simple construct – just play the music you haven’t heard yet.”