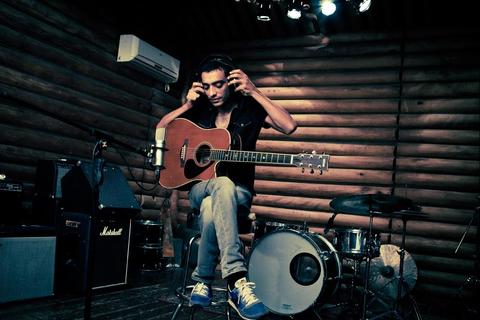 Dudu Tassa grew up in Tel-Aviv in the 1980s and released his first album at the age of 13. In 2002 he joined the band of Israel’s most popular TV show, and nowadays he is one of Israel’s most prominent singers-songwriters and guitarist in demand - a major figure in the country’s rock scene.
Dudu has also produced numerous albums for other artists and released 8 albums on his own, composed for television and cinema, including the opening song of– “ Israeli version of American Idol “and was nominated for best sound track in a feature film by Nati Adler’s “Kululush”. In 2009 Dudu released "In The End You Get Used To Everything," with the single "What A Day," in which guitarist Jonny Greenwood, member of Radiohead, was a guest. The song was frequently played on radio stations.
Dudu Tassa continues to be on the peak among the most popular rock artists in Israel.

Being from Iraqi-Jewish descent, Dudu’s “root-searching” revealed an amazing musical story – Dudu Tassa’s grandfather and his brother, known as the Al-Kuwaiti brothers, were the greatest composers/ musicians in Baghdad during the first half of the 20th century, innovators and creators of modern Iraqi music, still highly esteemed in the Arab world is spite of their Jewish origin. In this project- album released in 2011 Dudu Tassa and the Al Kuwaiti’s, salutes the Al-Kuwaitis, sings their songs in Arabic and Hebrew, and integrates Iraqi, Middle-eastern, and Israeli rock music, in a unique style.
The album features archive material from the Kuwaitis and singer Faiza Rushdie as well as up to date artists Yair Dalal on oud and known rock vocalists; Berry Sakharov and Yehudit Ravitz.

A documentary film titled : "Iraq' n Roll" has just been made about Dudu Tassa and the story of the Al Kuwaiti brothers.
Dudu Tassa and the Kuwaitis performed in Babelmed Music , France 2012 and the producers of this album Dudu Tassa and Nir Maimon received a prize for best music production from ACUM- Composers- Royalty Association.

This show is not only about the powerful voice, musicianship and energy of Dudu Tassa, but it makes justice to an important chapter in the history of popular Arabic music.

“His last album, a journey to his Iraqi musical roots “Dudu Tassa and the Kuweitis “earned great reviews and is selling well. The concerts are considered unique. A wild stage animal with a huge soul”
Yediot Tel Aviv