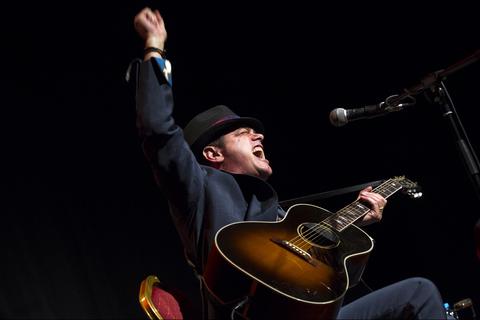 Santiago Auseron (AKA Juan Perro) is an acknowledged singer-songwriter who founded RADIO FUTURA. RADIO FUTURA has been acclaimed by radio stations and music publications alike as the "Best Spanish Group of the 1980s" and also, according to a 2004 poll of broadcasters for Spanish National Radio and Radio 3, the "Best Spanish Band of the last Quarter-Century." After releasing 9 LP's (SONY MUSIC) and after selling more than 1.000.000 copies, 1993 saw the debut of a new musical project under his pseudonym JUAN PERRO. As JUAN PERRO, Auseron has recorded Raices al viento (1995) in Habana, and in 1997, La huella sonora. In 2000, between tour segments in Mexico and the EEUU, he recorded Mr. Hambre, and in 2002, Cantares de vela (SONY MUSIC-WARNER). In 2011 released Rio Negro (LA HUELLA SONORA), JUAN PERRO's fifth album. Rio Negro has been acclaimed as one of his best recordings. Since 1984, Santiago Auseron has been researching the roots of "son cubano," and has produced a five-album compilation of Cuban traditional music called Semilla del Son (1991-1992). In 1996, Santiago Auseron produced La Antologia de Francisco Repilado, Compay Segundo.

SXSW is an excellent opportunity for us to present Santiago Auseron's current project:
- Casa en el Aire (unplugged duet) We invite you to explore the extensive biography of one of the most outstanding Spanish artists.