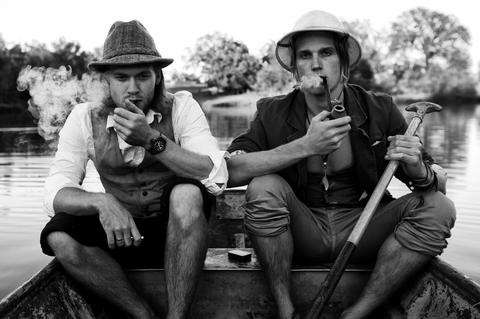 At the heart of Jamestown Revival is a friendship that spans over a decade.

Jonathan Clay and Zach Chance grew up together in the small Texas town of Magnolia. From a young age, they shared a love for music as well as the outdoors. About an hour north of Magnolia TX, there was some old family land with a dilapidated ranch house where they spent the better part of their adolescence.

At one point or another, music from Creedence Clearwater Revival and The Everly Brothers, to fellow Texans Willie Nelson, Guy Clark, and Stevie Ray Vaughan found it’s way through an old pair of speakers that sat on the back porch. The pair spent the day exploring that thousand-acre plot of land, and when the sun went down they took to the records of the songwriters and bands that inspired them. At the age of 22, they moved to Austin and began to craft a sound of their own. Deeply rooted in harmony, they merged the sounds of the South with classic American, and Western rock.

Looking for adventure, as well as a change of pace, they eventually made the decision to head west and make the move to Los Angeles, CA.

Throughout the course of the next 12 months, they wrote what will be Jamestown Revival’s first full-length album. It’s heavily autobiographical, telling the stories of their adventures, their discomforts, and their observations. In order to capture the spirit of the music, the two found a log cabin high within the Wasatch Mountains of Utah. The pair, along with their band and engineer, set out to convert it in to a temporary recording studio. With wild moose right outside the window, and aspen leaves spinning in the wind, they tracked 14 songs. Performed live, with no headphones, and entirely to tape, the process captured the moments in the room.

Now back L.A., the duo are planning to release their music and gear up for life back out on the road. These days, they’re exploring far more than just a thousand acres…