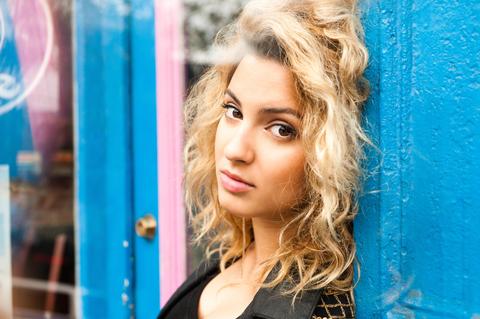 When she was 14, Tori Kelly started writing songs in the bedroom of her Southern California home. Within years she began sharing those songs online, and quickly won over Internet audiences with her sweetly soaring vocals, graceful guitar-playing, and knack for blending breezy melodies with boldly heart-on-sleeve lyrics. With her YouTube channel boasting more than 55 million views and almost 700,000 subscribers, the 20-year-old singer/songwriter/multi-instrumentalist is now at work on her debut album—a passionate pairing of rock and pop that reflects both her lifelong devotion to music and uncommon authenticity as an artist.

“One of the most important things to me as a songwriter is to make music that’s young and fresh, but also soulful and real,” says Kelly. “I want people to feel like they know me once they listen to my songs.” A musical purist who began singing at age three and learned to play drums and guitar by the time she was 16, Kelly forgoes over-the-top production in favor of laying bare her natural musicianship and ingenuity in songwriting. Bolstered by her easy magnetism as a performer, that potent combination helped her 2012 self-released EP Handmade Songs By Tori Kelly to debut at #6 on Soundscan’s New Artist chart and at #9 on Billboard’s Heatseekers chart. In creating the follow-up to Handmade Songs (which she wrote, produced, and mixed all on her own), Kelly has spent the better half of 2013 in the studio working to elevate her artistry while preserving the spirited simplicity of her sound.

The daughter of two musicians—Dad’s a singer and bassist, Mom plays piano and saxophone—Kelly was raised with a deep love of music. “Music was such a huge part of my life when I was growing up—I feel like it just comes second nature to me,” says Kelly, a Southern California native of Puerto Rican, Jamaican, German, and Irish descent. While she lists artists as eclectic as Michael Jackson, Jill Scott, Jeff Buckley, and Justin Timberlake as key inspirations, Kelly credits her early exposure to gospel singers like Crystal Lewis and J. Moss as a crucial influence on her moving and masterful vocal work. “My parents just told me recently how, when I was younger, they made a point of never telling me to shut up—even when I wouldn’t stop singing at the top of my lungs,” she says. “They always wanted to nurture whatever talent they saw in me.”

Upon taking part in her first singing competition at age six, Kelly decided to dedicate her life to making music. “I never had a plan B,” she confesses. “I just always knew this was what I was meant to do.” Along with working with a coach to strengthen her vocal skills, Kelly also took up drums at age 12 and later moved on to guitar and piano. “I didn’t want to have to rely on anyone else to be my guitar player, so I just learned how to play it myself,” she says. “A family friend showed me a few chords, and after that I just started playing by ear.”

For much of her early- to mid-teen years, Kelly focused on honing her songwriting and experimenting with self-production with the help of her computer’s GarageBand app. During that time she began to gain a globe-spanning following through YouTube, thanks to her faithful posting of inspired covers and original songs that showcased her ethereal vocals and subtly confident guitar-playing. In early 2012, Kelly’s online popularity skyrocketed when a YouTube video of her stripped-down, goosebump-inducing rendition of Frank Ocean’s “Thinkin Bout You” went viral— to date it’s garnered over 17 million views. “That was a crazy moment for me,” recalls Kelly. “It was just me singing and playing guitar and my friend Angie Girl beatboxing; we never expected it to get that kind of buzz. When that happened, I realized I needed to get more of my own music out into the world.”

Released in May 2012, Handmade Songs featured six tracks performed entirely by Kelly (with the exception of her father’s contributions on bass). “The response to the EP was really cool, because I had no ties to any label—it was just my fans driving the whole thing,” says Kelly. With Handmade Songs quickly climbing to the top ten on the iTunes pop chart, Kelly soon started playing shows at local coffeehouses to build more support for her music. Her very first coffeehouse show was attended by Scooter Braun (manager for artists like Justin Bieber, Ariana Grande and Carly Rae Jepsen), who has since become the manager of the singer/songwriter.

With the end of 2013 comes the release of Tori’s EP ‘Foreword’ which debuted at #16 on the Top 200 with over 16,000 units sold in the first week. She capped off the week performing lead single and iTunes single of the week, ‘Dear No One’ on the Ellen DeGeneres show.

In the past year alone, Kelly has sold out shows in several major cities (including dates at The Troubadour & The Roxy in Los Angeles, Bowery Ballroom & Gramercy Theatre in New York City, and Bush Hall in London), headlined a nine-city sold-out U.S. tour, and supported Jewel and Ed Sheeran on tour. She has also graced the pages of Elle, Glamour, and Teen Vogue. But for Kelly, the fact that her evolution from Internet sensation to “It girl” took years of effort is a major point of pride. “I’m really happy that none of this happened overnight, that it was a steady process where I learned from every stepping stone and my fans could all be a part of the experience with me,” she says.

Kelly says she has no shortage of inspiration for new songwriting material. “I’m still writing all the time, whether I’m in my room or out in the world and getting ideas down on my phone,” she says. “I can’t go a day without making music.” And when it comes to crafting songs for her debut album, Kelly asserts that her utmost ambition is to deliver honest, emotionally charged music that resonates with those who’ve supported her musical journey over the years. “I’m always very real in my songwriting—I’m not trying to put on a mask or hide behind any kind of gimmick,” she says. “No matter what I’m going to do my own thing. So when people tell me that they relate to my songs, or that something I’ve written really connects with them, that’s just the best feeling in the world.”