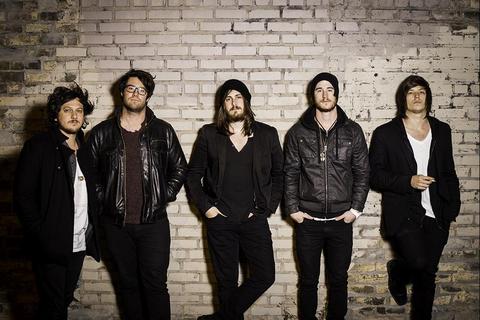 Kyle Morris and Cole Male forged a musical partnership in the most improbable of places: each booked as juveniles on a count of grand theft auto. The two met at a juvenile detention center in their Texas hometown when they were just 14. Ending up at the same high school later that year, Morris and Male soon threw themselves into a collaboration rooted in their mutual love of gritty garage rock and the guitar-fueled pop of British Invasion bands. Now, ten years later, Morris and Male serve as lead vocalist and guitarist for The Unlikely Candidates, a Fort Worth-based five-piece that brings a refined indie sensibility to the raw energy of rock music.

With our music were paying homage to a lineage of rock-and-roll thats larger than life, and at the same time pushing new sounds and lyrics that have a few different layers of meaning going on, says Morris, whose powerful vocals have an uncommon capacity for channeling angst, ardor, and tenderness all at once. Rounded out by guitarist Brenton Carney, bassist Jared Hornbeek, and drummer Kevin Goddard, The Unlikely Candidates have infused that formula into songs that reveals both their frenetic spirit and breezy sophistication in crafting lyrics and melody. The bands first offering is Follow My Feet, an intensely infectious single thats already won them major airplay on alternative radio. With its sky-high melodies, driving rhythms, lush guitar lines, and lyrics that gracefully twist hope into despair, Follow My Feet seamlessly embodies The Unlikely Candidates heady mix of artfulness and passion.

Striking that balance took years of trial and error for Morris and Male. Neither of us had been in a band before, and we ended up coming up a lot of songs in three different tempos, like we were some weird little acoustic prog-rock duo, recalls Morris of the bands early days. We were running on pretty much nothing more than a burning desire to make it out of this small town we were stuck in. After graduating high school, Morris escaped Fort Worth by enrolling at Texas A&M Universitybut quickly dropped out to devote himself full-time to making music.

Soon after quitting school, Morris headed to Europe and spent nearly half a year hopping from country to country and singing in the streets. I had a little bit of money saved up for what should have been the rest of college, and I blew it all busking around Europemuch to my familys dismay, he laughs. But in roaming from the Czech Republic to Germany to Scandinavia to the United Kingdom, Morris ultimately gained a stronger sense of his role as a songwriter. Maybe its some sort of mystery that I associated with the landscape, or that feeling of connecting with my history and lineage, but being there helped me to get more in touch with what I wanted to do with my music, he says. A voracious reader who favors Keats, Shakespeare, and the kind of writers and poets who lead people into a new perspective, Morris notes that he now aims to create songs that take such weighty themes as moralism and revolution and push them into the pop realm with the help of sing-along-worthy melodies and irresistible hooks.

Returning to Texas from his European sojourn in late 2010, Morris joined up with Male and eventually recruited Carney, Hornbeek, and Goddard to fill out the lineup of The Unlikely Candidates. As the band worked together on developing a fresh batch of songs, Morris found himself building off the songwriting inspiration he uncovered in Europe while also reclaiming his Texas roots. When I was younger I hated Texas and I hated its musiccountry seemed so uncool and like it had no edginess to it at all, says Morris. But as I got older I started understanding the craft behind that kind of songwriting, and now I definitely think weve picked up on the influence of people like Willie Nelson. Raised by a father obsessed with the hard-rock/metal of bands like AC/DC and Metallica, Morris is quick to point out that the melodic genius of the Beatles, razor-sharp introspection of Bob Dylan, moody swagger of the Strokes, and earthy authenticity of Conor Oberst have also had a serious impact on the bands songwriting.

Once theyd worked up a repertoire of songs, The Unlikely Candidates took to the road andafter a tour including stops at legendary venues like L.A.s Troubadour and Viper Roomlanded at SXSW 2013. Despite that being the drunkest few days of my whole life, we somehow managed to be at all the right places at all the right times, says Morris. The bands energetic live show a key element of The Unlikely Candidates experience caught the attention of Atlantic Records and led to their signing. The way we play live is more within an old-school style of rock-and-rollslightly theatrical, slightly drunk, always shifting from debaucherous to sentimental to down-to-earth and real, says Morris. Its crazy and fun and probably a little ridiculous sometimes. But