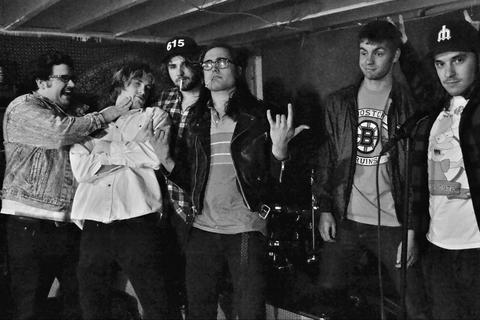 "What's in a name? that which we call a rose / By any other name would smell as sweet." - Romeo and Juliet

If Shakespeare was alive to get the led out, he would've listened to Diarrhea Planet, Nashville's favorite six-piece rock and roll band. Outfitted with a drummer and bassist that barrel forth with the power of a thousand locomotives and a four guitar arsenal able to unleash a meticulous torrent of expertly crafted hooks, riffs and solos, DP take everything you knew you loved about rock, punk and pop, jack it up way past 11, and leave you catching your breath and massaging the kink in your neck from all that head banging. Over the past few years, Diarrhea Planet have packed basements, bars and clubs with enough power to cause a blackout at the Super Bowl (no one's said they weren't not responsible for this year's fiasco), honing their chops and fine-tuning the 13 indelible cuts that make up their second LP I'm Rich Beyond Your Wildest Dreams, which will see release via Infinity Cat recordings.

Formed back in 2009 by frontman Jordan Smith, friend Evan P. Donohue, and drummer Casey Weissbuch, Diarrhea Planet was the trio's answer to the often stuffy, self-serious environment of Belmont University, where they were students. Soon after, the band tapped bassist Mike Boyle and third guitarist Brent Toler, and set about recording their debut EP Aloha — a boisterous, bombastic effort with enough massive hooks and chants to betray the fact it was recorded in a bedroom — which was self-released in 2009 and wracked up over 10,000 downloads. When Donohue left the band in 2010 to focus on his own music, they added friends and sure-fire shredders Evan Bird and Emmett Miller, who's 12 additional strings allowed Diarrhea Planet to start striving for the kind of joyous, stadium-sized tunes that's the stuff of pure rock and roll dreams.

On their 2011 debut Loose Jewels (Infinity Cat), The Planet showcased not just their knack for hooks, but also a unique approach to songwriting: In a nod to the grindcore acts he grew up listening to, Smith did away with the traditional, rigid verse-chorus-verse structure in favor of more piecemeal arrangements that move assuredly and effortlessly from one part to the next. Fleshed out by undeniable pop sensibilities, Loose Jewels was a 100-meter sprint of pure joy peppered with shred offs, fret-taps and a whole lot of whooping and hollering. On the road, the band showed what they were truly made of, unleashing power stance tableaus, on-stage theatrics and six-string tricks, while still hitting every necessary note with pristine precision. In the years since, they've shared stages and tours with Jeff the Brotherhood, Fucked Up, The Men, Wavves, Screaming Females and Titus Andronicus, who even shouted out The Planet on their last LP Local Business. Just recently guitar goddess Marnie Stern said she'd be the band's fifth axe slinger, and someone has to make sure that happens.

Back in December 2012, DP headed to Marcata Recordings, the barn-turned-studio in Upstate New York owned and operated by Kevin S. McMahon, a famed indie producer behind records by Titus Andronicus, Swans, The Walkmen, Real Estate and plenty more. The band wanted to go as big as possible, and set about cutting an album that delivered just that — I'm Rich traipses giddily across the rock and roll spectrum thanks to the band's ever-expanding understanding of how to utilize its four guitarists to maximum, orchestral effect. It's glorious, unabashedly fun, and bolstered by a musical and emotional maturity that reveals itself in the increasing complexity of the arrangements, musicianship, and lyrics.

This past March at SXSW, Diarrhea Planet set about solidifying a new wave of converts: Despite a busy schedule that saw them doing double duty on a few days — while also competing with the fest's deafening echo chamber and hyper-branded "secret" events — DP dominated every venue they played, and soon found their name on everyone's lips. How could it not be after such heroics like Miller and Bird scaling a rickety scaffolding at Cheer Up Charlie's for the final shred-off of fan favorite (and first DP song ever written) "Ghost With A Boner"? But while the over-the-top theatrics and goofiness provided good fodder, the music itself was just as impossible to ignore, even when their sets were packed with new songs unfamiliar to many audience members. With the impending release of I'm Rich Beyond Your Wildest Dreams and a sprawling summer tour, Diarrhea Planet are ready to conquer hearts, demolish ear drums, and remind you that while rock and roll's never needed saving, it's damn good to have a band that makes it as wholly life-affirming and flat out fun as it's supposed to be.