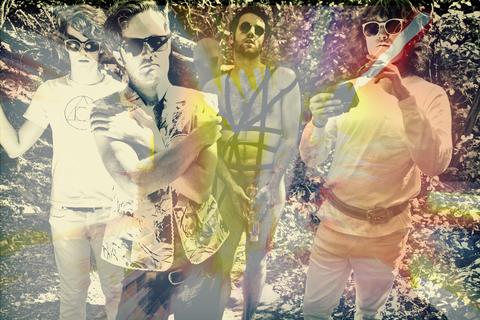 Fever The Ghost // Crab In Honey EP
In their very brief existence, Fever The Ghost have already made quite an impression with their uncanny, spectacular live performances, quickly becoming the one band on the tip of everyone's tongues within LA's Silverlake/Echo Park scene. While Fever The Ghost's grandiose rush on the senses dependably transports audiences into their strange universe, what's even more remarkable is how fully-formed their sophisticated sound arrives, cleverly weaving addictive hooks into their forward-thinking psych-pop pastiche. Fever The Ghost's songs have that rare quality where you can go home humming them after hearing the band live just once with melodies that linger in the mind.

On their adventurous debut EP Crab In Honey, Fever The Ghost not only delivers on that promise but also ups the ante on this expertly-crafted collection of interstellar pop with surprises lurking around every corner. Clocking in just under 20 minutes, Crab in Honey manages to pack in the ideas covering a wide range of sonic terrain, while never drifting too far from their melodic center. Easy to get into with inviting hooks, Crab In Honey grows more complex and deep with each successive listen.

A tight shuffling groove patiently pushes along the rocking skyward opener "Calico" as singer/guitarist Casper delivers his vocal with a catchy, yet understated cool. Riding a tasteful disco strut, "Source" makes the most of the linear structure with bouncy verses, deceivingly complex synth-work, and a very sticky chorus. The EP's second half haunts on the darker yet dreamy title track "Crab In Honey" and the ethereal EP closer "We'll Never Know The Place" introduces a change of instrumentation and breathtaking vocal arrangements to keep us guessing, leaving us eager to hear what comes next.

Mastered by Bob Ludwig (David Bowie, Nirvana, Radiohead), Crab In Honey EP will be out January 21st on Complicated Game.