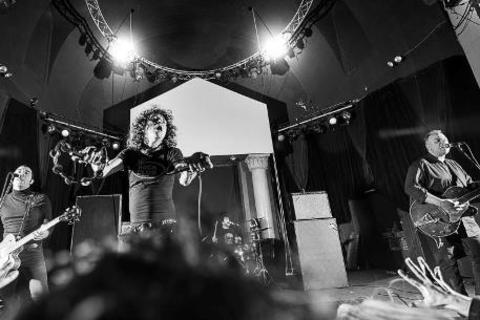 Listen to I NEED MORE

Formed in 1983 by Get Hip Recordings owner Gregg Kostelich, The CYNICS are a Garage-Punk institution.
THE CYNICS’ style has been clear since their 1983 inception: fuzzed ultra-distorted guitar, screaming, moaning vocals, with a straight-ahead no frills rhythm section. The influences are extreme ‘60s Punk, R&B, and other loud, frantic trash. Gregg has occasionally steered the band into flirtations with folk-rock and little pop, but it’s the grunged-out punkers that have created THE CYNICS’ reputation. Though Gregg’s guitar is the backbone of the band, vocalist Michael Kastelic’s contribution to THE CYNICS sound cannot be underestimated. In concert (and on record) he screeches, wails, and moans with great abandon, while his frail, thin body shakes throughout the room. Michael is a truly possessed frontman.
Since the 2007 recording in Spain of the band’s 7th full-length album, Here We are, The CYNICS have been graced with a fantastic and powerful rhythm section of two talented musicians from Asturias (Spain): Angel Kaplan and Pablo Gonzalez. They have been touring relentlessly with the band since and also joined Gregg and Michael in Detroit for the recording of their latest album, SPINNING WHEEL MOTEL (2012) under the masterful direction of Jim Diamond .
In an interview on March 21, 1986, Gregg Kostelich said “I was maybe 4 or 5 when I started collecting Garage records, and I’ve been listening to that type of music ever since. And I was lucky enough to see a couple of shows I was a little kid…my parents would bring to see bands like THE SONICS and THE BLUE MAGOOS and THE WHO, when I was about 7 or 8! I didn’t know what was going on really, but it was really exciting. I was kinda embarrassed in a way because I was with my parents.” When I mentioned that this early exposure to garage music explained THE CYNICS style, Gregg responded “Yeah, maybe I got brain damage from all the noise!”