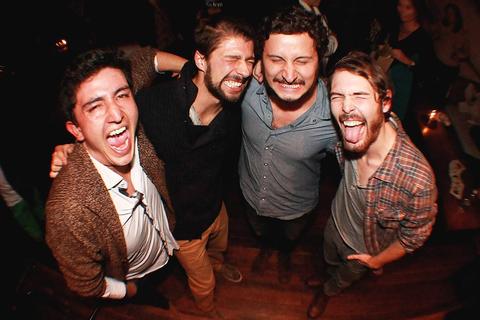 Oh'laville was formed in 2009 in Bogotá, Colombia. This folk-rock band plays acoustic, raw and transparent music using three voices, a 12-string guitar, a folk guitar, an acoustic bass and drums.

“Theirs is an acoustic proposal rarely seen in our latitudes, taking into account the design and music inside their first work. Good omens” (Radio Nacional de Colombia).

Mateo París, Andrés Toro, Andrés Sierra and Luis Lizarralde studied together at school, and music bonded them since they were young. On 2011, they decided to record their first album: Pedazos de Papel. The album received very good critics from local press, which highlighted Oh'laville´s particular sound and the coherence with its artwork and boxset, made out of pieces of paper.

“With a raw, rustic and introspective sound, it's one of the best colombian records in 2012" (El Tiempo).

On 2013, Oh'laville was selected to be part of Festival Rock Al Parque, the biggest free music festival en Latin America. Their impressive presentation alerted press members and bookers, for the first time opening doors for local and abroad shows. Then, they were called for Festival Hermoso Ruido and Festival Estéreo Picnic, the most important music festival in Colombia.