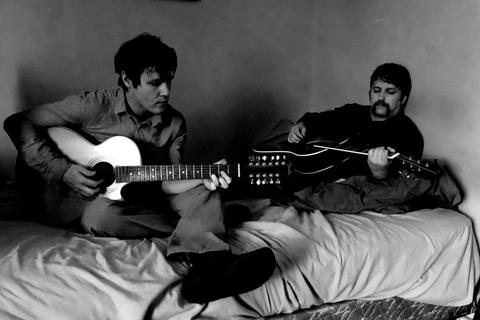 New Bums is the the grudging match-up of Ben Chasny (Six Organs of Admittance, 200 Years, Rangda, who's hiring?) and Donovan Quinn (Skygreen Leopards). These two didn't like each other at first, but now make sweet and sour music together over the light of the magical Sterno. Their songs are all that: songs, with lyrics set in a space to speak to the human buried in you. People's music, with all the stark confessions, tall tales, bleak humors and punch lines the people can bear. The voices are two, spinning harmonies, both heavenly. Behind the acoustics and voices is lots of space, but there are a few extra instruments that come and go as the boys move from stately processional to street corner sing-around to bluesy weeper to low-rollicking rock 'n' roll and back again.

Picking their direction and floating along on a pair of acoustics, New Bums are the sound of Old Drunk America, dancing out of the shadows, coming forth again to stand in the light, in the hopes of repopulating those sad old single-occupancy hotels before they're all torn down. After releasing the "Slim Volume" single earlier this year, their debut LP, Voices In A Rented Room is set for release in the future year, on February 19th, 2014, to be exact!