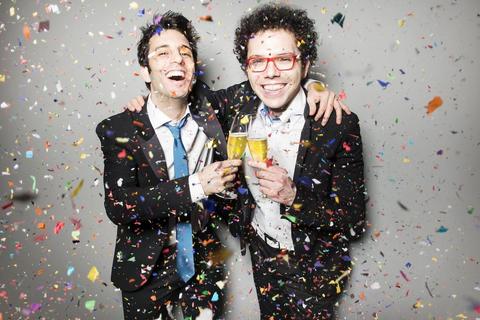 Ian and Chad first became friends while enrolled at NYU and studying the music business. At first, Chad encouraged Ian to start singing and actually became his manager, but they soon realized they were kindred spirits creatively, forging a musical partnership. As they developed a devout New York and online following it opened the door to much bigger things to come.

Most recently, things are coming together for A Great big World with their latest single, "Say Something." Making its television debut on Fox's So You Think You Can Dance, the song instantly resonated with audiences everywhere. This follows up a bevy of notable placements for the duo, including the cast of Glee covering their anthem, “This Is the New Year”, in a pivotal show moment earlier this year. The song has also served as the title track for the movie New Year’s Eve as well as the theme for MTV’s I Used To Be Fat with additional syncs on Amazing Race, One Tree Hill, ESPN, and Good Morning America.

⋆ 12:00AM The Neighbourhood