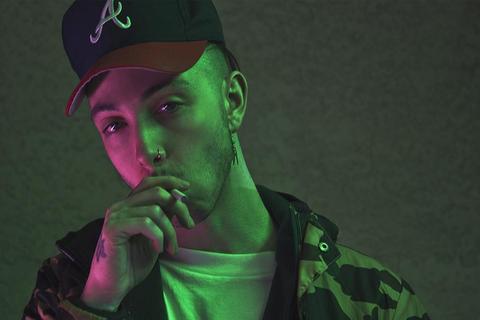 Introducing Danny Seth... the young white rapper out of London. Hailing from the Last Night In Paris collective, Danny isn't your typical 'white rapper' though... think A$AP meets Slick Rick with a sprinkle of Kanye and a dash of Eminem. Taking his influences from all over the US - North South East and West, Danny truly is a hip-hop all rounder offering something fresh and unique.

Having been noticed by the likes of Pharrell, Tyga and Kanye, and recently being featured on the Been Trill mixtapes,

'UK emcee Danny Seth is quite the interesting character, and today he presents his Prespliffs Vol. II mixtape. Drawing influences from all over the U.S. to contrive his own unique hip-hop sound, he combines his charismatic flow over some hard-hitting trap instrumentals, making for an enjoyable listen. Having been described as a fusion of A$AP Rocky meets Slick Rick,'

'Everyone's favorite (or soon to be) white rapper from across the pond just released his first extensive EP. Prespliffs Vol. II is not so much a mixtape but more so a culmination of Danny Seth's hip hop career leading up to this point. With a set goal in place, creating three volumes of Prespliffs mixtapes Danny is set to change the hip hop game forever'

'When asked to describe his look—the punk-lite coif, tinted round specs, elephant-print safari shirt, and two feather charms dangling from his left ear—Danny Seth is at a loss for words. “I just pick up things from everywhere and hope that I don’t look like a fuckin’ idiot,” says the 22-year-old U.K. export, whose recent EPs, Prespliffs Vol. I and Vol. II, pay tribute to the American emcees (Clipse, Lil Wayne) he grew up idolizing in London’s Watford borough. He’s also quick to address that other elephant in the room: namely, that he’s a pale, skinny, baby-faced British bloke trying to stake a claim to a primarily U.S. genre full of haters. “I’m a white Jewish boy, and where I’m from it’s not the most normal thing to be a rapper,” admits Seth. But his tracks’ self-mocking intros and videos reveal a goofy, Eminem-like humor—something that’s all but dead in contemporary hip-hop—while his Vol. II cut “Stereotypes” tackles his detractors head on. “With that song I put my balls on the table,” he says. “I’m like, Is there any reason you’re hating on me? I want people to laugh, but when it comes to the rapping, it’s serious.” Seth plans to unveil Boadicea—his line of unisex accessories, boxers, and bags—this summer, just before releasing Prespliffs Vol. 3. “I’ve been waiting for the right features and producers,” he says of the debut album he’s currently putting together.'

'Danny Seth's most recent release was the long awaited Pre-Spliffs Volume ll which got a resounding reception of thumbs up. Danny and the LNIP guys often frequent Russia and Germany where they have a devoted following and word on the grapevine is they've got a lot of big labels at their door. No matter what your music taste, you have to take your hat off to the successful independent artists and Danny seems to have cracked the formula.'

⋆ 12:00AM The Neighbourhood