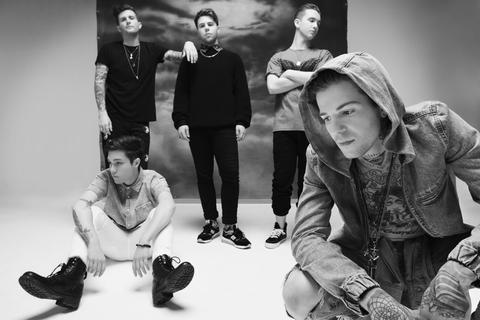 In early 2012 a mysterious band appeared online. The group, The Neighbourhood, revealed no biographical information, no photos and no backstory, offering only a moody track titled “Female Robbery.” Fans and the press were confounded, scouring the Internet for any information that might lead them to the identity of these musicians. Pieces of the puzzle, some reflecting reality and some not so much, began to emerge. The Neighbourhood were a quintet. They were from California despite the British spelling of their name. They had a second track, “Sweater Weather,” which had an accompanying— and equally dark— video.

Although The Neighbourhood’s identity remained hazy, it became clear that the music they were making felt transformative to critics and fans alike. The evocative combination of rock instruments with R&B and hip-hop aesthetics seemed, in many ways, revelatory, a reimagining of sounds that seemed to make people clamor for more information with even greater fervor. In April, BBC Radio One DJ Zane Lowe, an early champion of the group, let it slip that The Neighbourhood was the handiwork of musician Jesse Rutherford, a resident of Newbury Park, CA. By early May, as the band unveiled a free, self-released EP titled I’m Sorry, it became understood that the identity of this young band was, ultimately, secondary to the music itself.

So who are The Neighbourhood? In essence, the group, which formed in August of 2011, is a collection of five friends who make music together. They’re headed by Rutherford, a 21-year-old singer who has dabbled in various genres, including hip-hop, before crafting the merge of sounds that categorizes The Neighbourhood’s style. Their debut EP was produced by Justyn Pilbrow, who brought Emile Haynie onboard to collaborate on “Female Robbery.” The EP, recorded at the end of last year, is composed of shadowy, emotional music with visuals to match. And this was all carefully considered.

“I always have a strong vision before I go into anything,” Rutherford says. “I don’t know how to make music any other way. It was all in my head, and that vision for the music was to make hip-hop beats with guitars and I was going to sing and rap over them. We wanted to do that hip-hop aesthetic on an indie platform.”

By the end of 2012, the band released two more songs on an EP called Thank You, and with their debut album I Love You. out on April 23, 2013, the final piece of the puzzle completes the band’s first statement.

“I love you. That’s it. That’s the end of the statement. That’s the one where you figure it out. That’s all that needs to be said,” explains Rutherford.

I Love You. may be the end of the statement, but it’s the beginning of what is shaping up to be a very interesting conversation. The line between mainstream accessibility and indie credibility is becoming increasingly blurry, and The Neighbourhood walks that line very comfortably on their debut album.

“If we could live in both worlds as long as possible, then that’s great. I don’t think the world lets you do that, unfortunately, because the indie crowd eventually pushes you away and radio and the rest of the pop mainstream world takes hold of you. I don’t think there’s always something wrong with that,” says Rutherford, shortly after explaining that he heard himself on the radio the other day and thought it was “fucking rad.”

He describes a pattern that has played out time and time again, but things are changing, and The Neighbourhood is in a perfect position to play a major role in that change. After all, Rutherford grew up on hip-hop, a world in which some of the most popular artists are also the most credible. With I Love You., the group expands on their genre-defying style, and as their story develops, they inevitably give up a lot of the mystery that drew so much attention in the first place. But this was all part of the plan. Now that everything is laid out, it all seems a little more simple now—and sometimes it’s the most simple of ideas that carry the most weight.