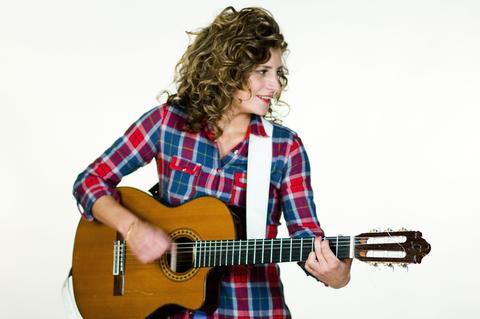 Soy sola and I have a good soul
The Ana's solo career began almost accidentally: during a family meeting, after the performances of her cousins Daniel and Jorge Drexler, she was encouraged to show a song she had been working in for a while. The Producer and musician Carlos Casacuberta listened her song by chance and the next day, he declared his interest in Ana’s songs.
In 2006, with the production of the former member of Peyote Asesino, “Soy Sola” was edited. The songs, that mixed in an unique way the folk music with contemporaries beats, were received with great reviews and presented to a full house both in Uruguay and Argentina.
The tours and awards arrived soon: Uruguay, Argentina, Brazil, Spain, Denmark and Sweden are seduced by the sweet and powerful voice of the singer.
On 2007, Ana was nominated for “Best New Folk Artist” at the Gardel Awards (Argentina) and for “Best New Artist”, “Best Soloist of the Year” and “Best Production of the Year” at the Graffiti Awards (Uruguay). That same year, the Rolling Stone Magazine ranks "Soy Sola"
as revelation album.
Mother of all sins

After the deep impact and good reviews of "Soy sola", Ana started to work in the composition of her second album. The result will be "Soy pecadora", released in 2009 with Matías Cella’s production.
This second album - unprecedented reinterpretation of folk music mixed with pop and electronic – repeated the same critical acclaim and recognition as the first one.
“I feel that Soy pecadora set a path. I feel free after the album was released.
Kind of: ‘I am a sinner, so what?’. I knew it has some provocation. I wanted to say something.
I often feel that we are surrounded by people who do not say anything.
I sing what I am,
singing it’s a place for honesty”.
While she was presenting her own album, Ana also participated as invited to concerts and recordings of established artists such as Fernando Cabrera, Jorge Drexler, León Gieco, Teresa
Parodi, Liliana Herrero, Lisandro Aristimuño, Kevin Johansen and El Cuarteto de Nos.
In 2011, after shows and tours abroad, Ana presented her two albums at the prestigious Teatro Solis. The public enjoyed every tune and lyric, confirming once and for all the so-called "anapradismo".
That same year, Ana edited with the Spanish artist Queyi an album for children named “Queremos un carril bici”. Presented in a new box-set format, the fourteen songs are accompanied by their corresponding illustrated stories, origami and papers dolls bodies cutouts.
Recorded in Brazil under the production of Marcelo Corsetti, the album had almost immediately a Portuguese version.
Two shores

The year 2012 marks a new achievement in the career of Ana. The renowned songwriter and singer Teresa Parodi, an icon of the argentinian popular music, invite her to a project of co-writing .
"I am very prolific writer and even though she is more new in this activity,
Ana already has an extraordinary inventiveness. She surprised me.
At first I felt a bit ashamed for the age difference,
but soon we found complicity.
Composing together means working on the agreement with the other person,
so we write ours songs by exploring the music and lyrics we both like."
Teresa Parodi
As a result of the meeting, Ana and Teresa shared the show "Cosido mano y a medida" and
the album "Y que más", released in 2013 and presented at the famous Festival de Cosquín (Argentina).
Uruguay-Cuba
-Set free the song-
During the first four months of 2013, two of the more powerful songwriters in Latin America - the Uruguayan Ana Prada and the Cuban Yusa – joined together under the music project name “Crema y Chocolate”: a show in which these women want to be realeased by their music
as well as set free to those who listen.
They visited more than 10 cities of Argentina and Uruguay.
Two totally different artists, with different traditions who set togehter naturaly: that’s why this union was so interesting. The common African descent is notable in the rhythm of the songs. But what they really share is the will to create and play music.
Otra pecadora sola
“Soy otra” is the third album by the Uruguayan singer and songwriter Ana Prada. The album closes the trilogy of "Soy" (Soy sola, 2006 and Soy pecadora, 2009) and starts a musical take off that placed her in the context of the Latin American Song. Once again, Ana Prada will surprise the audience with both her singing talent and compositional power. "Soy otra" carries the authentic signature of ‘freshness made song’ that Ana Prada gave us since the released of her first album.
“... She awoke us with her first album, Soy Sola. Then she got us ginger up with the second, Soy Pecadora. Now she closes the trilogy with Soy Otra, a wink to the Latin song that crosses borders and boundaries and puts, for a while, the structure in the freezer while thaws any nostalgia…"
- ELLE Magazine