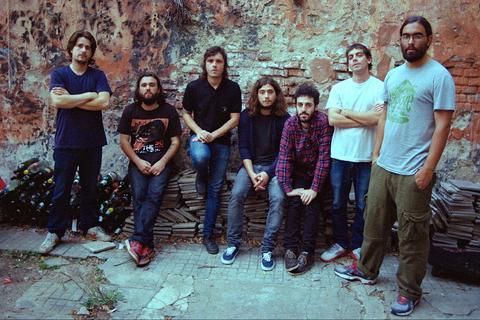 “The Doors at 140 kilometers an hour, with no brakes. Nobody can stop them”. That’s the way the Rolling Stone magazine defined Hablan por la Espalda (Talking behind the back); one of the new references in Uruguayan rock.

Created in the hardcore scene in the late 90´s, the band evolved during the following years due to a personal – and bold – remake of the pre-dictatorship oriental candombe beat (the legacy of Tótem & El Kinto, amongst others); in their risky musical search, percussion contributes to generate a mystic halo of afro-charrúa ritual, merging itself with Black Sabbath type riffs and organs inspired in those of Ray Manzarek.

Throughout their jurney the group, with a challenging staging, has toured in Europe and a large portion of South America, meanwhile they have cds and vinyls published in headquartes so diverse sucha as Suitzerland and Brazil.

In October of 2011 they were part of the celebration of Uruguay´s Bicentennial Anniversary along with El Cuarteto de Nos, Jaime Roos, Jorge Drexler, La Vela Puerga, amongst others.

Today they are working in their fifth álbum, the sucesor of Macumba (edited in 2009 by Sondor in Uruguay; and Estamos Felices in Argentina), album that obtained the award of “best alternative album of the year”, in the main stage of Uruguayan music, The Graffiti awards (2010 Edition), and during 2013 was edited in double vinyl.
In june of 2013 they participated of the Emerging City Festival (Buenos Aires) for more than 2000 people and in October they closed in the Rolling Stone stage at Trimarchi DG (Mar del Plata).

2014 started with tons of expectations, the recording of a new album and the invite to participate at the showcase SOUNDS OF URUGUAY, presented at the SXSW in Austin, TX.