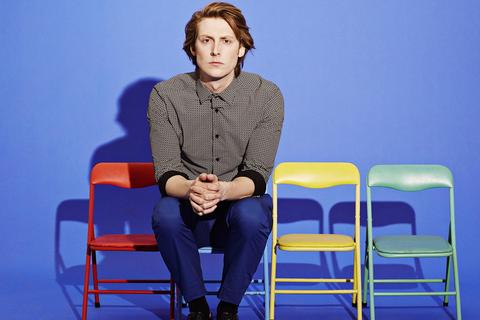 It’s hard to not feel good while listening to the new Eric Hutchinson record. It is a damn satisfying experience; the joys of melody and counter-melody and a myriad of rhythms from across the globe, as each song manages to reflect a pleasing sense that it is possible to remain transfixed in that nanosecond of pure bliss.

Pure, as in life; living it, seeing it, feeling it and…well, hearing it. “This album in every way was about simplifying,” says Hutchinson. “Stripping away all the layers to figure it out on my own, being in my home studio and asking myself, ‘Can I play this song on the guitar when it’s broken down to its bare basics? Is it a song or not?’”

It starts with the beat, as does all of life; and Pure Fiction is nothing if not a celebration of rhythm – South African, Bossa nova, four-on-the-floor rock and slap-back funk, reminding us we are indeed alive and the thump-thump-thump that keeps it going can and will force us to dance. Just try not to move while listening to “I Got The Feelin’ Now” or “A Little More” or “I Don’t Love U”.

These are songs wrapped in tempo, tight as the proverbial drum, with vocal lifts and twists that breathe inside percussion. “I tried really hard to not get in the way of these songs,” says Hutchinson. “I usually agonize over a certain chord progression or lyric, but this time I just let it happen. I stopped wondering what it was or where any of it came from.”

Pure Fiction is Hutchinson’s elegy to pop music, a place to fit all those melodies that are so comforting in their immediate hook you could swear you’ve heard them before. Someone must have already raised the gospel pleading of “Forever” or the choral Na-Na’s that herald “Tell The World”, the record’s first single. It is a striking prologue to the album’s underlying theme – holding onto the best moments in life and shamelessly shouting it from a mountain top.

“I live in constant social media, sharing in this world of endless best moments. Nobody, including me, ever seems to post their bad day online. ‘Tell The World’ is kinda a jab at that, but also it’s that celebration we feel when we want to share the best things in life.”

“Forever” is a master’s course in dynamic ranges; from the massaged acoustic open to the lilting lead vocal as prologue to chest-caving bass drum kicks, all of it bedding the wash of harmonies that appear as if a choir. It evokes the best of the British New Romantics period seeped in a New York club scene. “I was trying to get out of my head space, and for me, that meant co-writing with someone else for the very first time,” effuses Hutchinson about his collaboration with The 88’s Keith Slettedahl. “I came to love it more than anything I could come up with on my own.”

Freeing his mind, getting back to basics and collaborating produced an evocative pallet for Hutchinson, borne from his recent travels of leisure, specifically the breathtaking city of Barcelona. Set against experiences from a wave of touring over the years, this global view is made manifest in Pure Fiction. “The more places you go the more you realize the same things matter to everybody,” Hutchinson says, recalling his “inspiration wall”, a shrine to creativity he hung above his humble workspace; photos, paintings, and postcards.

The “inspiration wall” can be heard in the nearest Hutchinson has come to a ballad, “Sun Goes Down”; mixing another mother of a melody with striking lyrical imagery. “I found this old postcard from the 1950’s and hung it on my wall. One day I was looking at it and wondering what the story was behind it. So I wrote one for it.” To Hutchinson, the postcard is a metaphor for the captured moments of Pure Fiction: “On the front a desert sky orange, red and brown/ She wrote will you think of me/When the sun goes down.”

The journey to Hutchinson’s spiritual center is infused in the achingly infectious “Love Like You” with its subtle tensions that draws the listener to the lyric through an almost hypnotic vocal performance. The subtle duplicitous lines like “This is a crash landing, we’re living a dream” hint at Hutchinson’s playful seduction of how much these moments of happiness are the result of blind chance.

Hutchinson used the welcomed crossroads of making his third studio album to absorb more modern sounds into his compositions and expand into unique recording techniques suggested by producers, Jerrod Bettis, (Adele, OneRepublic, Serena Ryder) & Aben Eubanks (Kelly Clarkson) who ably assisted in the musical arrangements while also playing many of the accompanying instruments. Bettis & Eubanks helped Hutchinson imbue the tracks with atmosphere, as if one were listening to a collection of musical vignettes.

Beneath the evolution of Hutchinson as a composer and recording artist is an awareness of his second love beyond creation, performing. That love is the nucleus of Pure Fiction, a celebration of the perfect moment between artist and audience. “When we’re the in the moment, the audience and I, and I’m lost in the song, it’s as good as it was before or will ever be,” he says. “It’s the reason I picked up the guitar in the first place – you play that chord and you sing and it’s harmony in the real sense of the word, like everything makes sense, and nothing else matters. That’s music to me on its gut level; listening to a perfect song or writing a moving lyric or singing a golden melody; time stops, and I’m very lucky I get to do that for a living.”

Which brings us back to living, as in living in the moment – pure, as in joy; the essence of Pure Fiction; an honest expression of an artist, free and at the top of his game.