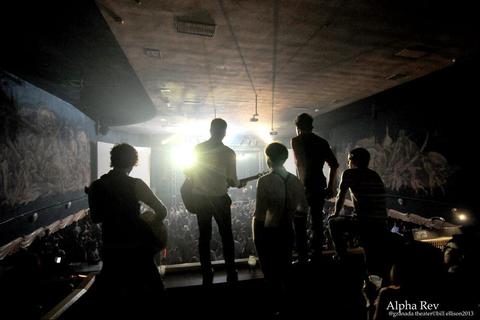 Above all else, Alpha Rev is a journey into the depths of the human experience. Frontman Casey McPherson's gripping, emotional songwriting dares others to search out hope in the bleakest of circumstances and the unique instrumentation pays homage to the classical music that gave him his love for the art. While McPherson's songwriting and rock-inspired vocals form the core of Alpha Rev's music, he is supported by a unique cast of musicians that fill Alpha Rev's songs with as much classical beauty as American rock.Together, Alpha Rev offers up layered, orchestral, melody-driven masterpieces able to turn strangers to super fans in a single listen.

Home schooled in small town Texas, frontman Casey McPherson studied classical piano for 12 years and learned to play guitar left handed after figuring out it only worked when he played it upside down. The first band he started, Endochine, succeeded on many levels but during this time, McPherson lost his father and only brother to suicide. Faced with unimaginable tragedy and the dissolution of his band of five years, Casey began to realize that his music, and his life, needed to take a turn in a more positive direction.
Forming in 2005, Alpha Rev, became a vehicle to grapple with the outpouring of grief that results from losses of that magnitude. Today, McPherson helps others who've
lost family to depression and suicide as a volunteer spokesperson for the National Institute of Mental Health organization, Mental Health America of Texas.
“Music changes people,” says McPherson. “We’re trying to find happiness in music as opposed to self-destruction,” he says. “It’s my desire, and has always been to be a part of our group, that we make each other better musicians, we make each other better men, we challenge each other, we fight and we forgive. Everybody in the band has really adopted that ideal,” says McPherson. “Alpha Rev is more than a band name---it’s a motto.”

Extra Notes
* Alpha Rev has been signed to Hollywood Records
* McPherson's song "Colder Months" won the 2007 Sonicbids Snocap/American Songwriter contest. Casey will be featured in the November/December issue of American Songwriter Magazine as one of the best new up and coming songwriters, and the song will be distributed to a readership of over 30,000.
* Selected to showcase at NACA (National Association of Campus Activities) showcase in Little Rock Arkansas, for all states in the central U.S. /2007
* Selected to showcase at NACA National Convention in St. Louis, Mo. in Feb. 2008 for all U.S. colleges
* Selected to showcase at TAFE (Texas Association of Fairs and Events) in Austin 2008
* Showcasing in NY,NY at CMJ (College Music Journal)/2007
* Showcasing in Austin for SXSW 2008
* Myspace following well over 30,000 and counting
* Casey McPherson has recently filmed public service announcements for the Mental Health Association of America on suicide prevention
* The song "Colder Months" was selected for the c.d. compilation "Breaking the Silence"
* McPherson has been selected as a featured artist for the 10th annual Jeff Buckley tribute at Uncommon Ground in Chicago Nov 17-19.
* Featured artist on mycoke.com
* Songs licensed by MTV: Underaged and Engaged; The Real World
* Radio play in Austin on KROX 101.5, KGSR 107.1, KLBJ 93.7 , and in Seattle on KEXP 90.3
* "Lower me Down" featured in the independent film "Pineapple"
* The first unsigned band on Yahoo! Music
* Selected by Austin Monthly Magazine as top band most likely to succeed out of Austin in 2008