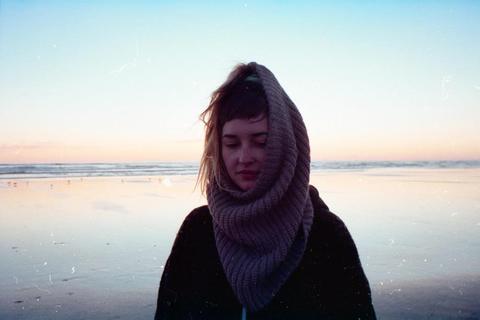 Sincerity and raw emotion reverberate throughout Jess Williamson’s unhurried songs. Her songs tell stories, with the music persisting as a partner to lyrics that build haunting and specific, yet relatable, images.

For a record that runs just under a half-hour, there’s an unhurried quality to Jess Williamson’s latest release, Native State. The seven songs unfurl at a humble pace, emphasizing spare instrumentation – a simple banjo line underpinned with a groaning cello; a bass run snaking around a dobro slide – and her emotive singing.

That quiet pull reflects the state of mind Williamson was in when she created them. She had just moved back to her hometown of Austin, Texas, after spending a stretch studying photography in New York City. Her return, she says, “marked a long period of turning inward and spending a good deal of time alone, doing self work and shifting my priorities a bit.”

Instead of immediately throwing herself in the bustle of Austin’s music scene, she slowed down her daily life and daily routine, reconnected with the deep, natural beauty of Texas, and found the still and quiet of her world allowed her to better hear her own musical voice. Or as she puts it, “Native State is your native state of being; who you are at your core.”

In that sense, Native State is also a record about healing, of acknowledging the wounds (both self-inflicted and otherwise) of your past and moving beyond them, and of recognizing, as Williamson sings on “Seventh Song,” “how holy it is just to quietly sit with someone?”

As personal as the album is to Williamson and her world, there’s a universality to it as well. It manages the rare feat of feeling introspective while speaking directly to you. Who among us wouldn’t find something to relate to in her poignant ode to a relationship’s end (the moving title track), or her evocation of the chest-aching beauty of the natural world (“You Can Have Heaven on Earth”), or her remembrance of edging closer to adulthood (“Seventh Song”). The songs may be inspired by her life and the lives of those close to her, but they are for us all.

Native State simply doesn’t feel like your typical folk and country-inspired music from the South. Williamson’s approach is far too unique and haunting, too poetic and pointed to be lumped in with the rest of the twangy rabble. It is connected in sound and spirit to the deep heart of Texas but has the ability to transport us all to our own place of comfort, calm, and contentment.