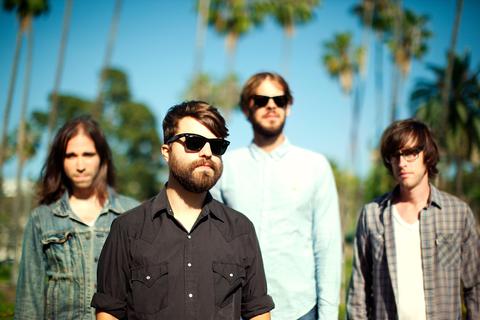 Named after the smaller, smoother waves looks for when he is surfing, Soft Swells is an upbeat, poppier take on indie music. You could attribute Tim “falling in love and finding true happiness” as the reason for the hopeful slant on his newest release, an EP entitled Lifeboats. Perhaps you are already familiar with the song and EP, as they have been featured in a recent nationwide ad campaign for Best Buy (if you skip fast-forwarding commercials on the TiVO once in a while, you’d be amazed what you can learn). Mostly recorded in Tim’s Los Feliz apartment and producer Dave Lynch’s studio in Lewes, England (as well as some pick-up sessions in Hollywood and Ann Arbor, MI) Soft Swells recordings are achieved by Tim and Dave “sending parts back and forth.” Sure Tim does all of the writing, but this puddle jumping collaboration works amazingly well for the band. Tim creates the songs, then off to Dave for some sound rounding-out and polish. The new EP features a remix of the original “Lifeboats” track by Jon Visger (Absofacto, Dale Earnhardt Jr. Jr.), a few more original tunes and even a cover of T-Rex’s “Children of The Revolution.”

In February of 2012 Soft Swells released their first album to the acclaim of everyone from MTV to TIME magazine and USA Today to Consequence of Sound. Influenced by the Brit-pop he loved growing up (Definitely Maybe was the first album that hit him in the chest) his obvious love of melodies, hooks and sentiment shine through with each track. Soft Swells plays to consistently packed houses in LA with an incredible live band featuring Kyle Fredrickson, Matt Mayhall and Christopher Pappas that brings to life the meticulous studio sound perfected by Tim and Dave.