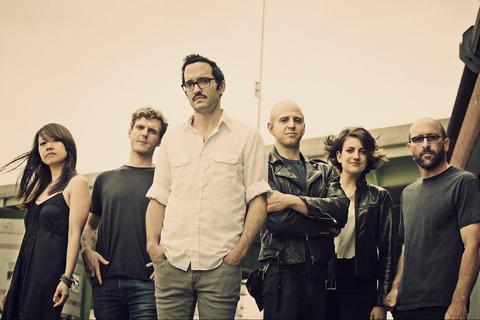 Hawk and Dove is a post-Americana rock band with a calm-before-the-storm approach, a contemporary yet classic sound that's like the psychedelic country David Bowie never wrote. “Hawk and Dove channel a 60’s pop band and a modern alternative outfit,” The Deli says. Supajam adds, “it's almost like an alt act doing the seventies.”
Singer Elijah Miller and guitarist John Kleber met at summer camp when they were 13 years old. 12 years later, they met again in New York, where they discovered they shared a vision for the music they played. Together with AJ Sausville (drums), Joan Chew (violin and bass), Max Hodes (tenor guitar and vocals), and Caitlin Becker (keys and vocals), they have created an album deeply rooted in rock, country, and psychedelia.
This Yesterday Will Never End (2014) juxtaposes haunting ballads with thunderous stoner grooves, crafting a unique rock experience. This Yesterday is “…an album that transcends the boundaries created by different genres of music," The Aquarian says. "Hawk and Dove transition… effortlessly, and take the listener on a journey guided by Miller’s tender singing.”
Hawk and Dove's songs never do what you expect them to. They ramp up with enormous energy to what would normally break into some bombastic chug-a-long, then scale back with restraint to relish small moments of sonic delight. Guitar, violin, and banjo drone like slow-moving glaciers. Ballads bounce with off-kilter rhythms. Keyboards tumble down the scale just when it seems they'll ascend. This disarming inventiveness is what makes Hawk and Dove's sound so beguiling. With their steadily growing following—and a killer live show—Hawk and Dove is proving to be the loudest quiet band you have ever heard.

The show at Valhalla on Thursday, March 13