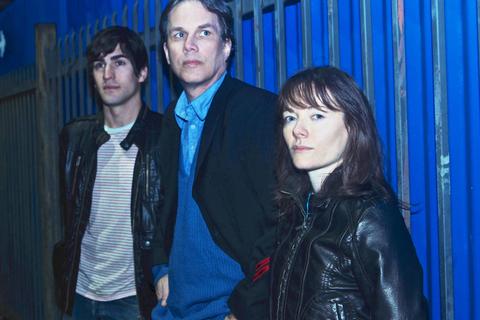 French-American post-punk outfit DTCV was formed in Los Angeles in 2012 by Guylaine Vivarat (ex-Useless Keys, Tennis System), novelist/screenwriter James Greer, and Chris Dunn, a recent transplant from Chicago. Known for its incendiary live shows, the group has been compared variously to Sonic Youth, Mission of Burma, and “post-Nico Velvet Underground with Debbie Harry on vocals.”

DTCV has thus far released two EPs, Very Fallen World and Basket of Masks. A full length album, However Strange, was released in late August 2012 on cassette by Burger Records to coincide with a national tour opening for Guided By Voices in September of that year. All three of these earlier releases will be reissued in January 2014 by Mock Records under the title The Early Year. The groop recently released Hilarious Heaven, an ambitious (read: contains free jazz saxophone skronk and flute solo(s), a piano ballad in French, synth-pop, a Monks cover, and two songs that surpass the eleven minute mark) double album recorded by Steve Kille of Dead Meadow, on Xemu Records. The brilliant artwork was supplied by Robert Pollard of Guided By Voices. DTCV will be touring extensively throughout 2014 in support of both Hilarious Heaven and The Early Year. (The title for the former was taken from James Joyce’s Finnegans Wake. FYI.)

The show at Valhalla on Thursday, March 13