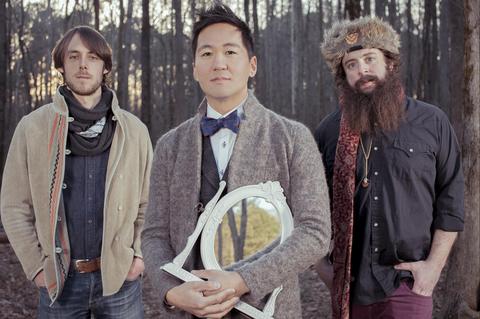 Kishi Bashi's debut full-length is a bright and soaring avant-pop record written primarily on violin - Kishi Bashi's main instrument which has brought him to record and tour with the likes of Regina Spector, Sondre Lerche, Alexi Murdoch, of Montreal and more. The first two singles "It All Began With a Burst" and "Bright Whites" have already been getting attention from SPIN, Consequence of Sound and more.

Kishi Bashi collaborated with of Montreal's Kevin Barnes on that band's new album, Paralytic Stalks. This last endeavor he credits with some of his most recent musical growth, acknowledging that Barnes pushed him to new heights of creativity, forcing him to explore a broader use of his primary instrument: the violin. This experimentation affected his loop-based live show and led to him write more of the new record with violin rather than piano or guitar, loosening him from the grip of habit and expanding his palette. Kishi Bashi uses Japanese singing as another of many layers, doing so without any trace of gimmickry, and achieving what, to Western ears, must sound like an expression of the ineffable.

After lead track "Intro/Pathos, Pathos," a soaring yet concise amalgam of all that is to come, the record unfolds with a gentle, and somehow grander revisiting of two songs from Room for Dream, reigniting their purpose with subtle variations that serve the larger arc of this new LP. From the deconstructed doo-wop of "Wonder Woman, Wonder Me," a 21st century transmission of Smile-era Brian Wilson to the menacing marriage of Eastern hues and Western operatics in "Beat the Bright out of Me," this album is a mediation between opposing drives, offering possible reconciliation but never promising it. Kishi Bashi played and produced 151a entirely himself. Kishi Bashi is on Joyful Noise Recordings.

The show at Half Step on Friday, March 14